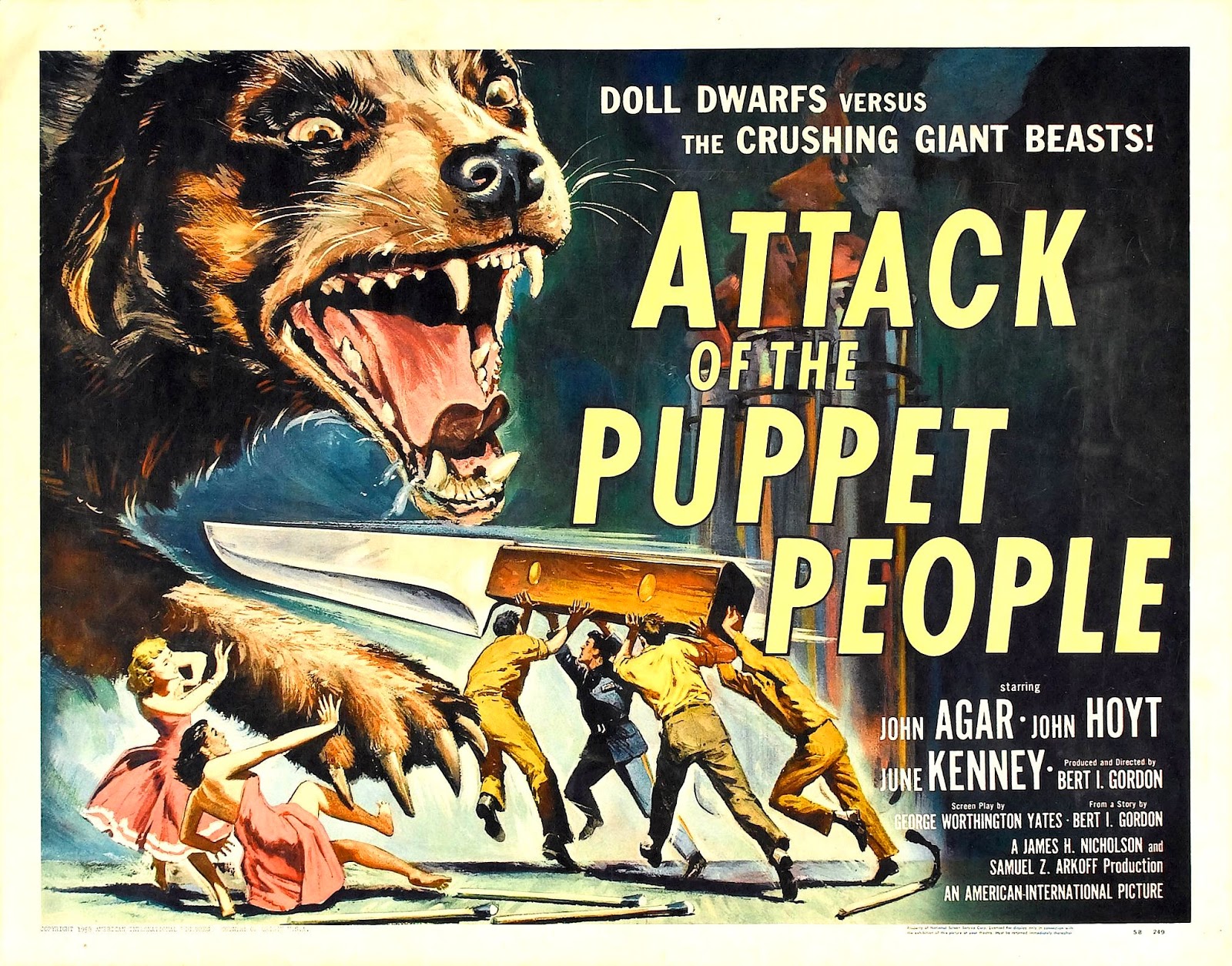 Loopy doll maker hires a new secretary. She isn't interested because he seems to think his dolls are real people. He begs her to take the job because ... it's the fifties.

She confesses her suspicions to a salesman who laughs in her face. They date (because that makes sense) and shortly after he proposes, he mysteriously disappears. Just like a bunch of other people. After she accuses her boss of turning people into dolls, he shrinks her and adds her to his collection. See, he wasn't crazy. Just lonely.

Well crafted, well paced, predictable, unimaginative, uninspired, watchable. You know what would have made this better? If the puppet people actually attacked something. Or if the scene in the poster took place. Or threw a hint of sexual perversion, or cold war fear, or drama, or action. A well crafted baloney on white is still a baloney on white. Hey, sometimes I get hungry.

A key element in any Sci-Fi film is the hardware. Sounds harsh, but for the most part that's true. Puppet People has hardware, but it's barely described. There was the analogy to how a projector makes images larger, but Willie Wonka did a better job on the exposition.

Director Bert Gordon took a break from making giant-people movies to make a little-person movie, but has our protagonists go to the drive-in to see one of his films. Anything else interesting here? Nope. Maybe I'd say John Agar deserved a better movie, but let's face facts. This was right in his wheelhouse. AMRU 3.
Posted by Fred Theilig at 10:10 PM No comments: 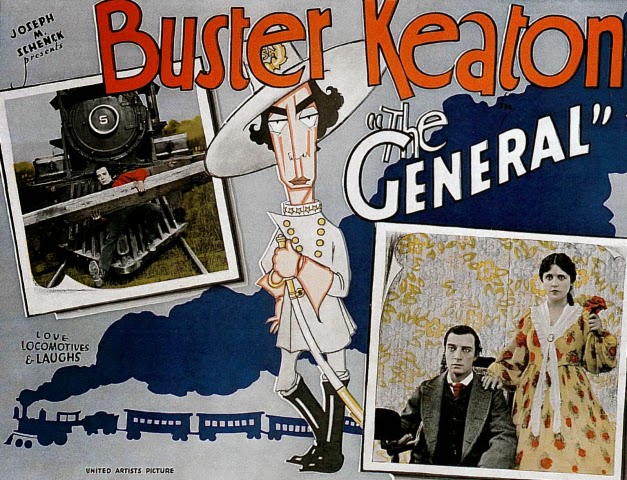 Johnnie Gray (Buster Keaton) is a train engineer at the onset of the War of Northern Aggression. Wishing to win the favor of his love, he is first in line at the recruitment office. Because he is more valuable as an engineer, they refuse to enlist him. But they don't tell him why.

When he tells his love they wouldn't enlist him, she doesn't believe him, having been told he never got in line. She won't see him again. A year later Johnnie's train (The General) is captured by Northern scalawags, the pretty Annabelle Lee along with it. Johnnie pursues them alone.

A silent comedy where the star's trademark is to not change his expression. Hmm. How's that going to work. Surprisingly well it turns out. Frequently I found myself chuckling to the slapstick comedy. It totally won me over. It is interesting to note that the setting for this film was more recent to the filmmakers than the end of World War II is for us.

In addition to Keaton's comic genius, this is a fascinating movie to watch. The action sequences were well shot, the pacing was good, and some of the stunts were ... well, I'm surprised Keaton didn't break his fool head ten times over. No lawyer today would allow anything close to this. You can start with the scene of the train rolling directly into town without any kind of barrier. From there, you have Keaton falling down repeatedly on the tracks, jumping from car to car, rolling down a rocky slide directly into the path of an oncoming train, and sitting on the connecting rod while the engine is in motion.

Hey, my first Buster Keaton! Yea, he was in Sunset Blvd, but as a cameo. The writer, director, star of this movie gave himself tenth billing. I read once that Michael Keaton took his sir name out of respect. Can't find a reference to that now. Michael's real last name is Douglas.

The General shows that sound, while a useful tool in storytelling, is not essential. The Netflix copy is crisp but after a brief inspection, it appears the Amazon Prime copy is slightly better, if four minutes shorter. Skip the public domain copies haunting the internet. The subtle nuances, the acrobatics, the action sequences, and the big battle pay-off deserve a quality copy. AMRU 4. Look for the most expensive single scene in the silent film era.
Posted by Fred Theilig at 9:20 PM No comments: