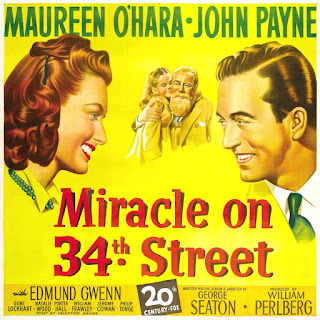 After discovering her Thanksgivings Day Parade Santa is drunk, pretty Doris (Maureen O’Hara) hires a spectator who looks the part. He does such a good job that he is hired by Macy’s to be their regular store Santa. But rather than talk children into Macy’s overstock product, he refers them to competitors to get the exact toy they want. Initially this goes over poorly with management until it becomes a public relations boon. Things get complicated when they realize that Kris Kringle (Edmund Gwenn) actually believes himself to be Santa. Like, for real!

So, the objects in play are the stern realist Doris with a precocious daughter (Natalie Wood). They have little time for such fantasies like Santa. Also, the neighbor Fred who wants to know Doris a little better, nudge nudge. He also happens to be a lawyer, which will come in handy later. Macy’s has a psychiatrist who thinks Kris Kringle ought to be locked up. Finally there is R.H. Macy himself who wants to keep the goodwill train rolling, and heads will roll if it doesn’t. They couldn’t get the real R.H. Macy to play the part because he’d been dead seventy years before filming began. It’s been another seventy years since so you can see how long the “Christmas is so commercialized nowadays” mantra has been going.

Gene Lockhart, whom I saw most recently as Bob Cratchit, is the judge caught in the position of determining Santa's sanity. Here also is Thelma Ritter’s first role. Also is possibly Jack Albertson’s first screen role. He was Charlie’s granddad but I remember him most from television.

Macy's and Gimbel's department stores play a significant part in the film. They agreed to have their names used only if they liked the finished product. This means if either one vetoed, significant parts would have to be reshot. As such, many of the references to the stores were cut-aways. Fortunately, both parties liked the movie and it was released in time for ... summer solstice? What the hell, people ...

Miracle on 34th Street is a charming film that holds up very well. That is, if you overlook the ‘frigid woman must learn to love so she can catch a man’ angle. Also, the part about the little girl being left in the care of a 30-something stranger living next door. Yea, that wouldn’t fly today. But apart from that, it still hits all the right notes. Edmund Gwenn (remember him from Them!) is the best Santa analog we can hope for, Maureen O’Hara is a wonderfully charming ice queen, and Natalie Wood basically steals the show. Few child actors were as impactful as she was here. AMRU 4.


“The DA's a Republican”

Posted by Fred Theilig at 5:45 PM No comments: 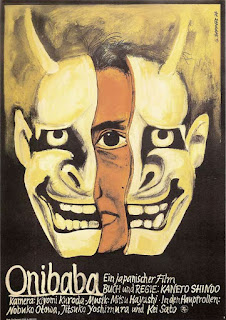 A young woman and her mother-in-law, waiting for the return of their husband/son, survive in war-torn medieval Japan by killing soldiers and selling their armor. After learning from a neighbor that he has been killed, the neighbor takes an interest in the young widow. Mother-in-law disapproves.

Onibaba is a film about jealousy and manipulation. It is frequently put into the genres of fantasy and horror, but I feel it defies categorization. It’s a simple story (essentially just three characters) with a strange, fantasy-like tone. A scary mask is involved but I resist giving too much away. The three characters relationship, and that of the dead man, are slowly revealed as the story unfolds.

Interesting tone, abrupt and ambiguous ending, Onibaba (which means Demon Hag or Devil Woman), is simple in story and complex in content. It’s a film that’s difficult to talk too much about, lest we go down a rabbit hole. AMRU 4.

Posted by Fred Theilig at 11:50 PM No comments: