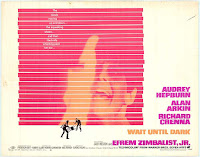 A woman, trafficking drugs inside a child's doll, gives it to an unsuspecting man to hold at the airport. When she later asks for the doll back, he can't find it. While the man is out, three criminals try to shake down his blind wife (Audrey Hepburn) for the doll.

Audrey Hepburn plays the Audrey Hepburn character, only pushing 40 this time. Efrem Zimbalist Jr played her husband. Folks might remember him from The FBI (in color!) Or as Stephanie Zimbalist's father. Or maybe not at all. Zimbalist sounds like the guy who plays the zimbals. Hate that guy. 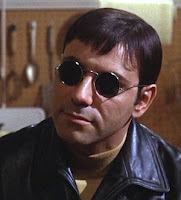 Hepburn got the Oscar nomination, but the real story is American hero Alan Arkin as Evil Ringo. He is truly diabolical as he coerces the other two criminals to assist recovering the doll. Arkin, then a two-time Oscar nominee, was asked if he felt overlooked for this part. He replied "You don't get nominated for being mean to Audrey Hepburn!" It'll be almost forty years before he wins. We will be seeing him again soon.

Wait Until Dark isn't without its flaws. All problems could have been avoided if they'd just lock their damn door. And what apartment doesn't have a back exit? That can't be to code. Also, the criminals plot was overly elaborate. They put on disguises for a blind lady, then they use their real names. And there are more, but what's the point.

Despite its flaws, Wait Until Dark is an excellent thriller. There are some real thrilling moments and your attention is never released. AMRU 3.5.


"I cannot negotiate in an atmosphere of mistrust."

Posted by Fred Theilig at 11:02 PM No comments: 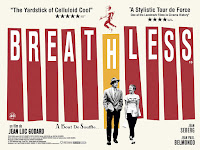 Michel is a two bit criminal obsessed with American culture and an American woman. He commits rash crimes while trying to convince Patricia to run off with him to Rome.

This was Jean-Luc Godard's first feature length film and my first foray into the French New Wave, whatever that is. The story was written by Francois Truffaut, the other FNW giant. I understand they didn't get along.

Godard needed to shorten the film but didn't want to remove any scenes. So, he just chopped up the slower parts, giving a strange, disconnected feeling of reality to the story, lending itself to the revolution in movie making during this time.

Pretty Jean Seberg played Joan of Arc as a teen, appeared in The Mouse that Roared, and seemed to be a rising star. She apparently suffered from depression before taking kill-me pills at the age of 40.

I found Breathless likable and in many aspects interesting, but I fall short of love. Stylish, but there wasn't much story to latch onto. Clever editing will take you only so far. AMRU 3.5.
Posted by Fred Theilig at 11:59 PM No comments: 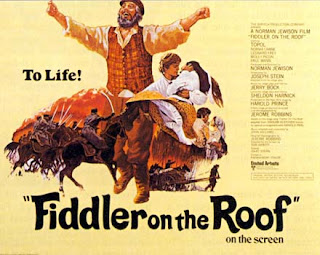 You see, there are these Jews in Russia. You know, before the revolution. And sometimes they fiddle on rooftops. And other stuff happens too.

In reality, Fiddler on the Roof is about tradition in the face of changing times. Changing social customs, changing political climate, and even a coming revolution. Through it all, through each crisis, the people make choices and move on.

Fiddler is another film I knew, but did not know. I knew or knew of the songs, was familiar with the setting, but didn't know anything about the story. Tevye is "blessed" with five daughters and a hard life. The older daughters are reaching marrying age and he finds they are making nontraditional choices starting with rejecting the matchmaker's selection. The movie does not follow the standard Hollywood story arc. Life goes on. No great resolution.

Norman Jewison was hired to direct because the studio thought he was Jewish (he's not). Things worked out pretty well. Jewison chose Topol from the London production over the more flamboyant Zero Mostel from Broadway. Zero held a grudge. Norma Crane was diagnosed with breast cancer before production, and told no one except Jewison and Topol. She would die in two years. Rosalind Harris, playing daughter Tzeitel, would eventually take over Crane's role on stage as Tevye/Topol's wife. That's not creepy at all.

A good indicator of a movie's impact is how long it sticks with me. At the time of this writing it has been a few weeks since I watched it, and I find my thoughts return to it. Little bits of dialog, the songs, and, oh my god, the dream sequence, stay on my mind. This is masterful storytelling, wonderful acting, and and an all-around treat. AMRU 4.5.


Perchik: Money is the world's curse.
Tevye: May the Lord smite me with it. And may I never recover.

Posted by Fred Theilig at 12:54 AM No comments: 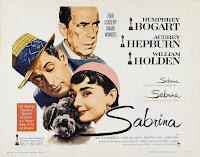 Young Sabrina (Audrey Hepburn) is the daughter of the Chauffeur. She has a life long crush on the playboy son of her father's employer (William Holden), but he hardly notices her. She is sent off to Paris to learn to cook and returns with a new outlook, and the attention of the Larrabee boys.

Responsible older brother Linus (Humphrey Bogart) arranges for brother David to marry the daughter of a sugar plantation owner as part of a larger plastics deal, when David finally notices Sabrina. Linus' solution is to get David out of the way, make her fall in love with him, then ship her off to Paris again with a half-hearted apology. Nice guy this Linus.

For most of this film I was loving it. Hepburn was absolutely charming and the dialog was great. But I really struggled with Bogart as the rich, responsible, leading man-type. Also, in his mid fifties, he was creepy grandpa next to Hepburn's porcelain skin. Cary Grant was originally cast, but he turned it down. Grant was only a couple years younger than Bogart, but looked much younger and was way more appropriate for the role.

Early critics said Holden should have played the older brother and someone younger play David, and I agree. He seemed old as playboy David, and Bogart was older than the man playing Sabrina's father!

Bogart also didn't think much of Hepburn or Holden, or even Billy Wilder. He wanted wife Lauren Bacall for the lead, but I can't imagine anyone matching Hepburn's charm. In three years he would be gone.

Sabrina is rather charming and well written, but what started well ended up being a fairly generic rom-com by the third act. Maybe I'm holding the fast start or questionable casting choices against it, but there's no helping that. At worst, it's still a fine film. AMRU 3.5.

Posted by Fred Theilig at 7:55 PM No comments: 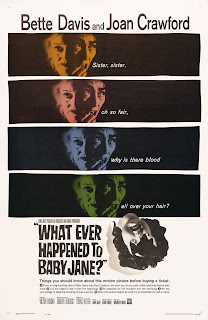 Jane Hudson (Bette Davis) was a child star who's career faltered as she entered adulthood. Overlooked sister Blanche (Joan Crawford) became the toast of Hollywood. At the height of her career Blanche is paralyzed in an accident and both sisters fade from memory. Old and forgotten, the two sisters live together. Blanche in a wheel chair, and Jane bitter and drunk.

How these two huge stars from the 30's and 40's, who hated each other in real life, were convinced to appear together in this unconventional horror/thriller is a mystery. And that it worked so well is downright amazing. Davis as Jane, looking ten years older than her 54ish years of age, is totally unhinged. You do not doubt for one moment the pent up hatred she feels, and the depravity she reached. As events unfold we learn more of their complicated relationship.

How well did they get along? Davis had a Coke machine put on the set because Crawford was married to the chairman of Pepsi. When Davis was nominated for an Oscar, Crawford campaigned against her. When Anne Bancroft won, Joan accepted it on her behalf. This natural animosity had to help with their onscreen chemistry.

I've been mostly underwhelmed by the performances I've seen from both women (excepting All About Eve), but they were terrific. The whole movie, front to back, is terrific. What I gave you above is just the setup to where the story begins. I don't dare spoil the story that unfolds. It's taught, thrilling, and amazing. Look for an appearance by King Tut. AMRU 4.5.


"Oh, Blanche? You know we've got rats in the cellar?"

Posted by Fred Theilig at 6:12 PM No comments: