A movie projectionist fantasies about being a detective. When he is framed for stealing a watch by his romantic rival, he does his own investigation. He fails and dejectedly goes back to his hum-drum life as a projectionist. He falls asleep in the projection booth and dreams himself onto the screen, where a similar adventure unfolds, with him as the heroic detective.

My enjoyment of The General emboldened me to try another Keaton silent comedy. Sherlock Jr was just as successful. Short (under 45 minutes), great picture quality, and excellent story telling. Again, Keaton nearly loses his fool head, quite literally as he fractures his neck in one stunt. I'm sure if my boys were willing to invest ten minutes to this film, they would have loved it. The humor and action totally holds up.

Buster's real-life dad was in the film! That's kinda interesting. He also played a Union General in The General. He was a vaudeville performer and later became an angry drunk. Buster displays some nice pool shooting, if accomplished using lots of edits. He practiced for four months with a pool expert.

Amusing, fast paced story. The movie within the movie proved a great technique for telling one story. Keaton used it well to showcase his talents. I am left with the feeling that I liked it slightly less than The General, but don't interpret that as a slight. Both are amazingly entertaining. For a silent film. AMRU 4.

"I did NOT mean it to be surrealistic. I just wanted it to look like a dream."
Posted by Fred Theilig at 9:14 PM No comments: 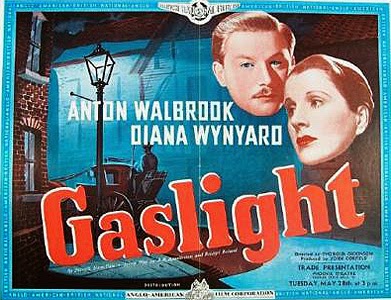 Twenty years after the unsolved murder of a singing diva, her hot young nephew (hot young Anton Walbrook) moves back into the stylish London house where it happened, with his new wife (Diana Wynyard). The dashing retired detective (dashing Frank Pettingell), stunned by the the master's resemblance to the dead woman's nephew, snoops around.

Principally we have the same story here, told somewhat differently. Both are based on the same play and this production appears to be truer to the source material. I recommend both movies equally and if you are to see both, I suggest the 1944 Hollywood version first. While Hollywood doesn't keep you in suspense very long, there is no doubt who the bad man is here.So, if you intend on watching either of these films, STOP READING NOW! Spoilers Abound as I compare and contrast.

The first interesting difference is familiar relations. Ingrid's Paula was in the house when her aunt, her legal guardian, was murdered. We see her taken away from the scene, learn a little of her life, then return ten years later. The detective, smitten by the aunt as a young boy, is amazed by the resemblance. We sympathize with her because of the additional details and because, well, she's Ingrid Bergman.

Diana's Bella has no connection to the house and we little to her. We first see her after moving back in and know her only as a frail woman with an angry husband. It's the retired detective who recognizes Anton's Paul Mallen as Louis Barre, who used to live in the same place twenty years prior.

A second change is that we are left to wonder if Paula is crazy. Initially we don't see Boyer manipulate her and can't be sure if she is indeed crazy or not. There is no question with Walbrook. From the onset he is cruel and deceptive. The only mystery is motive.

Also there is an interesting difference in the maid and husband relationship. Hollywood, deep in the throes of Hays Code censorship, hints at an inappropriate relationship. The English production explores that a wee bit more. They go to a burlesque show together. Nudge, nudge.

Apart from these and other minor changes (venue changes from 12 Pemlico Square to 9 Thorton Square, the character name changes, and the Hollywood addition of a society busy-body), there are remarkable similarities. Many key scenes are replicated in both, and the acting, sets, and photography are both top notch. All in all, the only real difference between the two is the Hollywood shine on the latter. Both are very much worth your time. We should be thankful that this film was not lost to us forever. AMRU 4.


"How did you get in here?"
"Interesting things about us ghosts, we don't have to bother with doors."

Posted by Fred Theilig at 8:36 PM No comments: 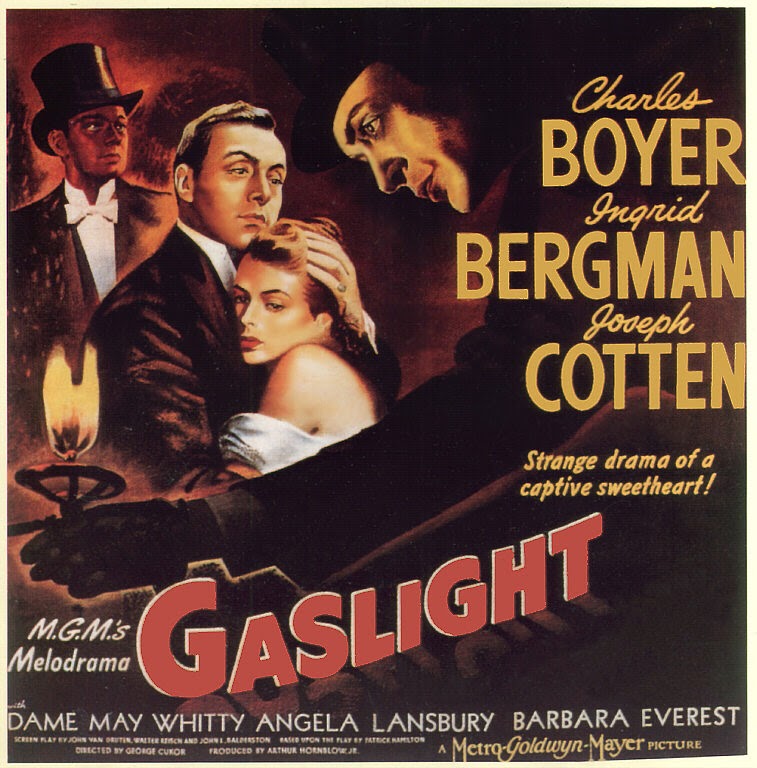 Ten years after the unsolved murder of a singing diva, her hot young niece (hot young Ingrid Bergman) moves back into the stylish London house where it happened, with her new husband (Charles Boyer). A dashing detective (dashing Joseph Cotten), stunned by the niece's resemblance to her aunt, reopens the cold case.

Gaslight is based on a play (Gas Light, or Angel Street), and had already been made into a movie four years earlier. Under the terms of the agreement, the producers ordered the destruction of all prints of the previous film. They failed to get them all, and the 1940 version has lapsed into the public domain. I saw it next.

Gas lights, that is, the lighting mechanism where natural gas was piped into houses for lighting purposes, certainly plays a large role in the story. Not only do they pepper the screen with shots of men lighting them, they even play into the story. Our protagonist becomes convinced that someone else is in the house because the lights dim, as if someone lit one elsewhere. They also add great ambiance and all gothic horror movies should have had them rather than foolish candelabras and sometimes even electric lights, totally ruining the mood. Had they not been expensive, and occasionally suffocate people, burn down houses, and even blow them up, they'd be a great addition to any home! Act now, supplies are limited! 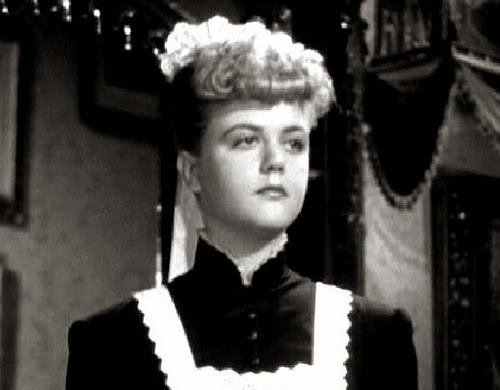 I learned a few things from watching this movie. First, that I am actually capable of saying the words "Angela Lansbury was hot". What a naughty bit of crumpet, she was! At 17 she quit her job in a local shop and launched her movie career. Secondly, and more importantly, I learned that I apparently have absolutely no friggin' clue what film-noir is. I'm classifying this sucker as a mystery (although not a terribly mysterious one). Melodrama, sure. Entertaining and well made movie, you bet! Film-noir? Doesn't smell like it to me. There is a detective and an element of claustrophobia, but hard boiled, pessimistic, and minimalist? It's set in the fashionable district of Victorian/Edwardian London. You know, the stuff dreams are made of. AMRU 4.