After his mother’s funeral, Philippe, son of the scientist Andre from the first film, learns what really happened to father. Spoiler alert: he accidentally turned himself into a bug then killed himself. Despite his debilitating fear of flies, he decides to complete dad’s work. Guess what happens? Vincent Price plays the disapproving uncle.

Written specifically to reuse the sets and props of the previous film, the filmmakers cut just about every corner they could. While The Fly was in color, Return Of was in black and white. The only corner they chose to keep was Price, who saw a few things in the script he liked. Unfortunately for him (and us) the filmmakers chose to cut that as well. What we end up with is essentially the same film, done worse, with slight modifications.

I don’t automatically discredit cash-grab sequels. I understand the forces at play, and sometimes poverty sparks creativity. Return of the Fly, however, brings nothing new to the table (except, maybe, Bunny-Man). Much of the first act is exposition to explain the events of the first film, as if there could be a single audience member that hadn’t see it the year prior. Same sets, same props, and for the most part same story. Even the same giant bug prosthetics. Bug-Man runs away while police shoot at him (insert your own reason here) while he holds his bug head on with his free hand! Price is all but wasted, putting in his most forgettable performance so far.

Return of the Fly isn’t hard to watch but even if you don’t try to compare it to the original, it is uninteresting. Poor script, mediocre acting, predictable story. Please skip. AMRU 2.

Posted by Fred Theilig at 6:21 PM No comments: 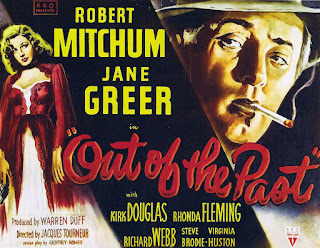 A former detective … or gangster (Robert Mitchum) tries to start a new life as a small town gas jockey when he is found by his old boss (Kirk Douglas) who has one more job for him.

Told partially in flashback, Jeff is trying to make a fresh start with a good girl when his past catches up with him. Seems old Jeff left his prior job on rather poor terms, with a backstory involving his boss’ two-timing, thieving girlfriend (Jane Greer), and it’s unclear if Whit wants to make amends or get revenge.

Out of the Past is a complex film chuck full of noir-speak that sometimes left me scratching my head ("Now, do you wanna talk business, or do you wanna play house?" or "You know, a dame with a rod is like a guy with a knitting needle"). Just about everyone was duplicitous and its unclear if they are ever telling the truth, even when talking to their co-conspirators. Add to that two femme-fatals (Greer and Rhonda Fleming) looked alike making me mistake the first for the second. My head got a lot of scratching done that day.

Overall, Out of the Past was nice but not spectacular. It holds your attention well, so AMRU 3.5. It's held in high esteem as a great Noir film, but man was it confounding. Mitchum joked that a few pages of the script were lost in the mimeo department. But still, I'll give it another watch. The Maltese Falcon was way better the second time around. This may be as well.


“Joe couldn't find a prayer in the Bible”

Posted by Fred Theilig at 7:00 PM No comments: 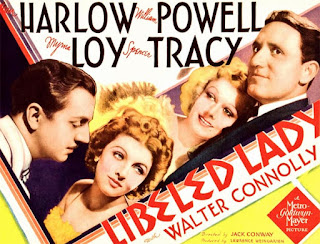 A newspaper editor (Spencer Tracy) is about to be married when his newspaper accidentally sends out an early edition with an unconfirmed story that Libels a Lady (Myrna Loy). Rich lady threatens to sue for five million bucks and put the paper out of business. So he hatches a plan. He hires a playboy ex-reporter (William Powell) to marry his own fiancee (Jean Harlow) then has him seduce the rich lady and get caught. Then she’ll have to drop the suit, because, reasons. Things don’t go according to plan.

What this all adds up to is a fairly generic 30’s rom-com except for a few things. First, it’s funny. Very funny. Secondly, the cast all seemed to be having a great time, and that’s because they were. The four principles became fast friends on the set and that easygoing atmosphere transferred well to the screen. This was the fourth pairing of Loy and Powell (of fourteen), so their chemistry was well known. Additionally, Powell and Harlow were dating (the old dog), so you got that there. Plus, everyone liked Tracy.

There is fairly little to say about Libeled Lady. Standard Rom-com story, but it was well crafted, well written, and funny. And it works. Better than some better known ones. If that sounds good, and you don’t have an aversion to the transatlantic accent, then it won’t disappoint. AMRU 4.

Posted by Fred Theilig at 12:12 AM No comments: 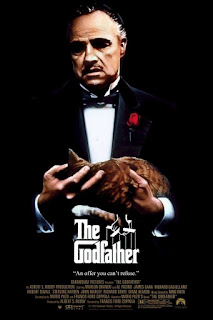 Well, you see, there’s this family. And they are in business. No, not the Mafia. We don’t use the M word here. Let’s just say they take care of their friends and take care of their enemies. It doesn’t make sense for me to summarize the story as I was the last person on earth past 30 to have seen The Godfather. Goomba mobsters whacking each other? Didn’t interest me.

The Godfather takes place over many years, from the end of World War II into the 1950’s. It covers many events and does not have a consistent central character. It illustrates how characters change over time, and sometimes fail to change. It launched (or solidified) the careers of a great many actors like James Caan, Robert Duvall, Diane Keaton, Talia Shire, and of course Al Pacino. Even 50 year old and victim of 2016 Abe Vigoda. But mostly it turned director Francis Ford Coppola into a directorial force to be reckoned with. He would go on to direct Part II, The Conversation, Apocalypse Now, then a whole pile of shit.

Simonetta Stefanelli plays Michael’s first wife and has a delightful nude scene, if you’re into that sort of thing. If IMDb is to be believed, she was 17 when the film was released. If her scenes were done four months prior, she wouldn’t have been that. Ah, the benefits of shooting in Italy. Hey, look, there's old friend Sterling Hayden! Once again proving he's not afraid to take acting chances. The baby being baptized at the end was director daughter Sofia Coppola, who would prove to be a far better director than actress.

Make no mistake: these are not good people. They are not heroes by any measure, even if some will see them as such. But neither are their victims. It's bad on bad and one cannot feel sorry for any of the deaths. There is no pristine protagonist to rally around and you shouldn't try to find one.

At just under three hours with no singular storyline, The Godfather does not lag, never fails to keep you enthralled. I was totally wrong to ignore it for so long. It is one of those films that everyone says is great, and that is because it is great. Solid cast, great acting, great script, great cinematography, and incredible storytelling. It has crept into popular culture in so many ways, and it forever changed the genre and film making as a whole. I will never doubt a film recommendation from my wife ever again. AMRU 5.


"Leave the gun. Take the cannoli."

Posted by Fred Theilig at 12:04 AM No comments: 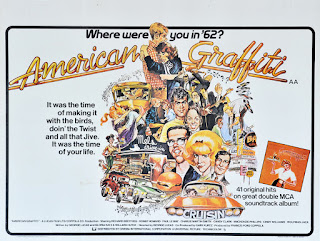 While cruising around their town, a young couple (Opie Cunningham and Shirley Feeney) come to terms with college and the direction of their relationship, a geek tries to be cool and score with a hot blond, a dork (Matt Hooper) becomes a criminal while searching for the perfect girl (Chrissy Snow), a thug tries to score with an under-aged girl (Julie Cooper), and an out-of-towner (Han Solo) wants to be top dog, set to a classic soundtrack hosted by Wolfman Jack.

I would go further into the details of the story, but really there isn’t much. This is simply a story of young people doing what young people so often do, and because of that it has a very authentic feel that is not often found. In this way alone it reminds me of Clerks (1994).

Happy Days, which premiered the following year, was not based on or directly inspired by American Graffiti as many people think. A year and a half earlier there was an episode of Love, American Style with a segment called “Love and Happy Days” which featured the Cunningham family and included Ron Howard, Marion Ross, and Anson Williams (Potsie). Fonzie didn’t exist yet. It was a failed TV pilot that nobody wanted to take a chance on, until this nostalgic piece of yesteryear became a box office smash. I remember seeing that rerun of that Love, American Style while Happy Days was still on the air (I’m very old, but you should have known that) and was completely confused by what I was watching.

Likely because of the Happy Days link this film was associated with the 1950’s but it was in fact set in 1962, ten years (or so) before it was released. The Wolfman got a huge career boost from his appearance and I have a memory of hearing his syndicated radio show circa 1980. My dad said it sounded like Wolfman Jack. I said it was, and he replied it couldn’t be. He was on the radio when he was a kid. In fact both my dad and he were born in the same year.

American Graffiti succeeds because it didn’t try to do, or to be too much. It was what it was, and the chord it struck was pitch perfect. It was a moment in time and comes across very sincere. That sounds easy to do, but it is not. The ash bins of Hollywood are filled with cliched and contrived teen comedies. Very watchable, very enjoyable, and worthwhile, even if you weren’t around in the 1960’s. Or 1990’s. AMRU 4.

I leave not with a quote but a YouTube video. It's creator later dismissed it as little more than the rantings of a fanboy, but I felt it summed up the film and it's success very well. Besides, that's more than I even aspire to do.

Posted by Fred Theilig at 10:54 PM No comments: