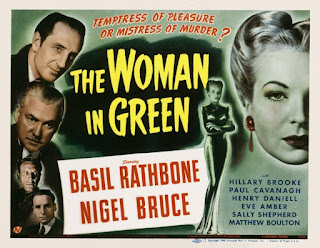 Young women of London are being killed and mutilated (had a finger cut off) and Scotland Yard (or whoever) has yet to find a single clue. Not one single clue! So, quite predictably, they turn to Sherlock Holmes (Basil Rathbone), and to a lesser extent, Watson (Nigel Bruce).

A significant plot point was spoiled by the TCM description and I hid this from the son that watched it with me. I won’t pay it forward. There is no reason for this to happen. This is the only one of the original Holmes films to fall into the public domain, which may explain the noticeably poorer audio and video quality.

Here again the studio used the same actors in different roles. Our titular Hillary Brooke, Henry Daniell, and Paul Cavanagh each appeared in two other episodes. This may have helped in keeping a consistent tone and quality.

The Woman in Green is not much of a mystery, isn’t as funny as the others, and has a less interesting story. Son and I both agreed it was the the worst of these so far. The poor audio quality likely didn’t help. I started these with my mom early last year and after brief hiatus when my boys went to camp for the summer, then got a few more in last fall. I had wanted to see the rest with her but fate didn’t allow it. Bowing to my completionist instincts, I’ll watch the rest. Not sure if my boys will bother. So, we were supposed to know that her gray dress was actually green? AMRU 3.

Posted by Fred Theilig at 10:04 PM No comments: