What is it with me and movies from 1932? Seriously!

Anyhow, a yacht full of preppies sail to one of those tropical paradises you hear so much about. The natives swim out to to fight over the trash yon white men so graciously dump overboard. A shark invades the party, so our hero (Joel McCrea) decides to make it go away by chumming the waters. He falls in but is rescued by a beautiful native (Dolores del Rio) and falls for her as well.

Well, despite his being rich and blond, and her being brunette and savage; he speaking ivy league, she speaking booga-booga, their attraction grows. Throw into the mix that she is the daughter of the king and was promised to a neighboring prince, things don't look good for our future cowboy.

The main claim to fame for Bird of Paradise is Dolores' nude swim scene, but don't get too excited, though. You can see the seam down her back at one point. She runs around topless save for a lei that stays annoyingly in the way no matter what she does, even while leaning over.

Old pal Creighton also has a small role, but he has no lines and his ugly mug isn't on screen enough to ruin the film. This was back when he was credited with the name he was born with, rather than the one his dad was born with.

All in all, not a terribly interesting movie. It's saving grace is the ending. Slightly less Hollywood than you might expect. AMRU 2.5.
Posted by Fred Theilig at 3:42 PM No comments:

Tony Comonte (Paul Muni), alias Scarface, is a two bit hood on the rise. George Raft is his buddy, Guino, and Ann Dvorak is his creepy looking sister. He murders and back-stabs his way to taking over the south side crime syndicate. Now the north side boss (Boris Karloff) is in his sights.

Here are a few neat things: the movie had the first ever film depiction of the Tommy Gun. Al Capone, who is intentionally confused the the titular character, loved the movie. He owned a copy. Betamax, I think. Tony and the gang see a play, which I slowly recognize as the source for the mediocre Crawford flick Rain, which came out the same year and by the same studio. Hmmmm.

Well, not much else to say. It kept my interest. Some funny parts, and certainly some historical importance. I pushed it to the top of my list because Netflix said they were taking it away from streaming, but they never did. Whatever. They've been having a lot of PR issues lately. Far be it for me to pile on. Anyhow, I enjoyed it. The best part might have been the look on my wife's face when I told her that I let the kids watch Scarface. AMRU 3.5.
Posted by Fred Theilig at 8:55 PM No comments:

or: How I Learned to Stop Worrying and Love the Bomb.

Brigadier General Jack Ripper (Sterling Hayden) has sent the codes to start a nuclear attack on the Soviet Union, then barricaded himself in his base, and convinced his soldiers that anyone who attacks are Russians. His plan is to provoke a response from the USSR forcing the Pentagon to make the decision to finish the job or else withstand a Soviet retaliation. The foppish British Captain Mandrake (Peter Sellers) tries to talk him down. Sellers also plays the President and the titular doctor.

Yet another movie I knew well, but knew nothing about. I knew it was anti-war, that Peter Sellers played multiple rolls, and that it was a screwball comedy, but that was it. It shouldn't have taken me this long to have seen it.

Theory is that the US military changed some of the procedures to insure this scenario cannot happen, but that sounds like Hollywood hokum to me. Nobody knew what the cockpit of a B52 looked like but there was one published photograph. The set designers concocted what they thought it should look like and apparently weren't too far off. Obviously, the military were not going to offer any assistance.

"Gentlemen, you can't fight in here! This is the War Room!"

Posted by Fred Theilig at 3:48 PM No comments: 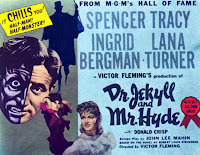 We know the story. Doctor Jekyll (Spencer Tracy) is experimenting in the true nature of man. The father of his hottie fiancee (Lana Turner) disapproves, but Jekyll can't help himself. Quite by accident he bumps into a low born cockney girl in the street (Ingrid Bergman) and falls deeply in lust. But he is a good man and mustn't allow base instincts take over. So he just kisses her. Nighty-night.
Well, where Jekyll must be a proper gentleman, good friend Hyde has no such requirements. Hyde coerces his concubine into being a kept woman and things slowly get out of hand. Again, you know the story. Tragedy for all.
For the most part, this was a remake of the famed 1931 version rather than the Stevenson work, and suffered the consequence of comparison. Tracy was eager to take the role but was embarrassed by it after fan reaction was rather harsh. Also, Bergman as a cockney barmaid? Hmmm. That's a bit of a stretch. Hotness allows one to get with many crimes and she did have it to spare.

There is one scene where a fevered Jekyll is struggling with his lust for the Bergman character and his duty to his fiancee. He is seen driving two horses, one dark and one white, with a manic expression on his face. Then the horses turn into Bergman and Turner, seemingly topless, with frantic, worried looks on their faces. How's that for slipping it by the sensors? This photo doesn't do it justice, but it's the best I could find.
This version was killed by the critics when it was released, but in fairness it's not bad. I haven't seen the Fredric March version yet, so I'll hold off final judgement, but it was definitely worth a look. AMRU 3.5.
One final comment about the media. I requested a set of disks from the library and when it was available, I didn't remember what it was or why I ordered it. I discovered that it was a four movie set, two of which were on my see list. This and House of Wax. With both movies, the DVD menu promised that the older version was on the flip side, but the set had Freaks and The Haunting instead. This matched the case, so I'm guessing someone bought the resale rights to the movies and didn't bother to change the menu.
Posted by Fred Theilig at 10:38 PM No comments:

Professor Jarrod (Vincent Price) is an eccentric artist who runs a mildly successful wax museum. He speaks of his creations as if they were living, breathing people. He lines up a new business partner because his old wants out, but his old partner can't wait. So he burns down the museum for the insurance money. Prof dies in the fire.
After a hair-brained hottie is murdered and her body is stolen from the morgue, the dead Professor Jarrod re-emerges to start a new museum, one that panders to the public's taste for the macabre. Hotties roommate (and new intern's fiancee) notices an usually strong resemblance between her and the new Joan of Arc exhibit. Nobody takes her seriously.
Hair-brained hottie's roommate was played by Phyllis Kirk (no relation to the Captain). She was a delightful damsel in distress here and would go on in four years to be a pitiful excuse of a Nora Charles in the TV version of The Thin Man. Want another pointless Star Trek reference? One of the Can-Can girls would go on to play Yeoman Janice Rand. One of Jarrod's handymen struck me as very familiar. Turns out he was a young Charles Bronson.
This is a remake of 1933's Mystery of the Wax Museum, and the disk menu said that version was on side two, but it wasn't. Same thing happened with another movie in the set.
This, I believe, was Price's first horror role. At least his first staring role. And it's a good one. Low budget, I suppose, but well made. It was filmed in 3D, which is weird because the director had only one eye. It wasn't 3D on my end so I can't say how effective having a yo-yo flung in my face worked out.
Somewhat elevated and understated in style, much like The Fly, I liked it about as much. Won't scare anybody, or surprise them very much, but it won't bore you either. AMRU 3.5.
Posted by Fred Theilig at 2:52 PM No comments:

Private Prewitt (Montgomery Clift) transfers from his bugle corp to a fighting unit in Hawaii. He was a boxer and doesn't want to box anymore, personal reasons. He is reunited with old friend, forty year old buck private Maggio (Frank Sinatra). His new CO is Captain Holmes, but the unit is run by hard-ass Sargent Warden (Burt Lancaster).

It seems Captain Holmes needs another boxer and won't take no for an answer. Prewitt takes all the abuse he can dish out. While off duty, Prewitt and Maggio seek out the company of the ladies. And by "company", we mean "have polite conversation with while they wear overly complicated dresses", nudge nudge, wink wink. Prewitt falls for one such lady (Donna Reed) even though her bland conversation and total lack of exposed skin is available to any man willing to pay for it.

Well, Maggio strikes up a great friendship with Sargent Fatso (Ernest Bognine, Mermaid Man, boys and girls!), Sargent Warden falls for single girl "Mrs. Captain Holmes" (Deborah Kerr), Prewitt learns to play nice, some young Japanese gentlemen stop by for a picnic, and everyone lives happily ever after. Except the people who die.

Montgomery Clift was totally miscast as Prewitt. I didn't believe him as a soldier, let alone a boxer. The fact that he got nominated for an acting Oscar either means academy voters were enthralled with this movie or I don't know anything about acting. I'm open to either interpretation.

The famous scene, you know the one, with Lancaster and Kerr (not a cur!) making out on the beach totally didn't play out as I expected. They run into the surf, wash ashore while kissing, run to their blankets, and Lancaster accuses her of being a slut. Not what I expected.

It won a ton of Oscars, and deserved them I would guess. It is a very well made movie with some good acting. Sinatra was good in his role. Oscar worthy, I don't know, but good. AMRU 3.5.

And to answer my question, totally the latter.
Posted by Fred Theilig at 6:50 PM No comments: