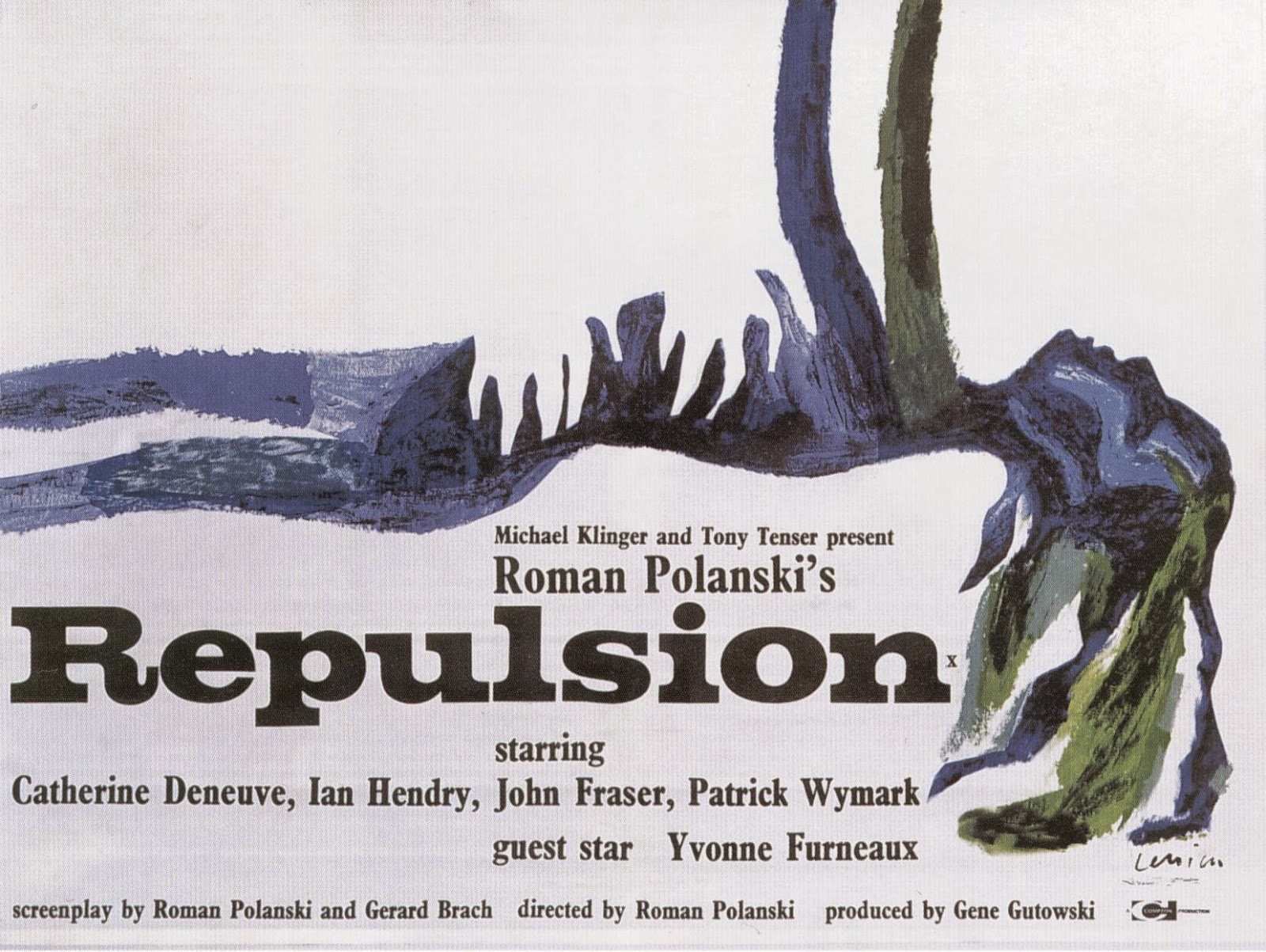 Pretty-pretty Carol (Catherine Deneuve) can't help but attract the attention of men, but she has something of an aversion to them. One might call it a repulsion. She is disturbed by her sister's relationship with a married man. When sis and stud-muffin go for an extended holiday, Carol's problems deepen.

Claustrophobic photography, odd angles, strange soundtrack, this slow burn takes some time to build up. Catherine is initially unimpressive (acting-wise, anyhow) as she sleep walks through her scenes. But things get going, and boy do they ever. Carol's descent into madness is frighteningly dark and disturbingly realistic.

I don't wish to give too much away, but this physiological thriller expands the definition of Horror (for me, anyhow). There are many elements that contribute to the storytelling. The viewer is left with questions, like what is and isn't real, what happened in Carol's past, and what happens next. The pacing and non-Hollywood style will put off some, but this is a singular movie. Expertly crafted and great conversation fodder. AMRU 4.
Posted by Fred Theilig at 9:12 PM No comments: 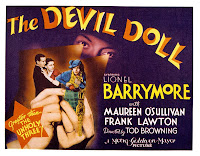 Two convicts escape together. One wants to exact revenge on his business partners who conspired to get him falsely imprisoned. The other wants to continue his work trying to make people little so that they eat less. When convict number 2 dies abruptly, convict 1 uses the talent of his creepy wife to complete his plan.

Allegedly classified as horror, it comes off more like a melodrama. The title makes it sound like an early version of Child's Play, but it's more of an early (and better) version of Attack of the Puppet People.

You see, shrinking people to six inches tall is fairly easy (obviously) but it seems their brain shrinks as well, making them incapable of free will. Lucky for convict 2, they can be controlled by staring at them with a constipated look on your face. Let's pack up the meth lab and head to Paris for some good old-fashioned revenge! Wait, how does an escaped convict and an off the grid swamp-scientist afford that? Best not to ask such questions.

Here is Tod Browning's penultimate (that's fancy-talk for second to last) directorial effort. I've seen a fair number of them and still not sure what to make of him. Seems he does well with good talent around him, and not so much otherwise. Freaks supposedly ruined his career, but he was pushing 60 by the time he did his last seven years later. Maybe TCM will run a bio on him sometime.

It's a fair, very watchable movie, that's not terribly crafted. The oversized sets for the little people to climb on were well done. And the special effects, while not amazing, were good for the day. Not Tod Browning's worst work. AMRU 3.
Posted by Fred Theilig at 10:09 PM No comments: 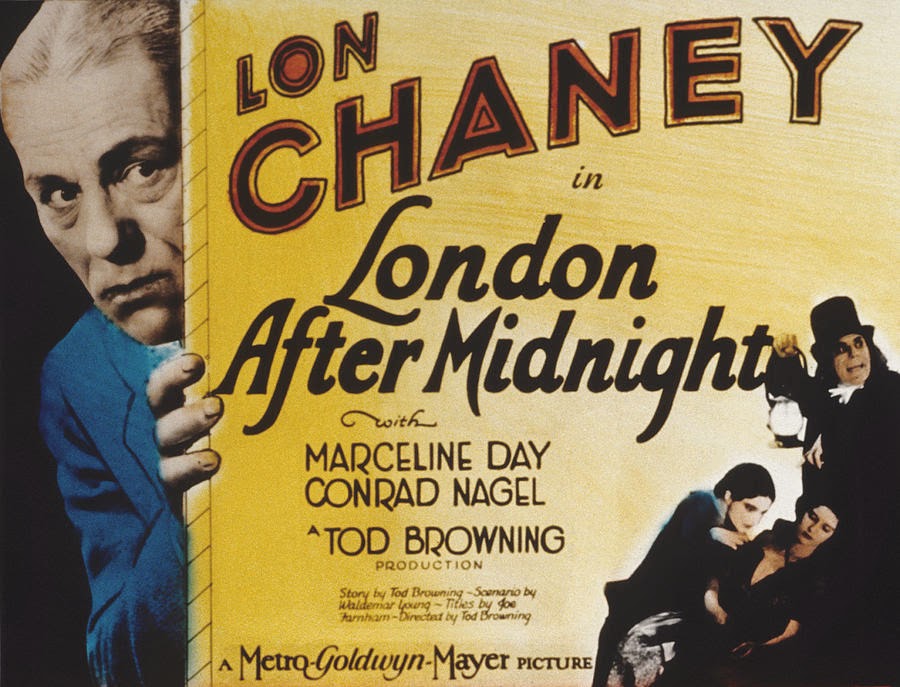 Five years after the suicide of a wealthy man, strange people lease his mansion. Maybe they're vampires!

Lon Chaney and Tod Browning made ten movies together and London After Midnight was their most successful, if not the highest praised. Come the sound era, it fell into obscurity, and was remade by Browning as Mark of the Vampire in 1935. The only known print was destroyed when an MGM vault caught fire, making it the most sought after lost film. Imagine my excitement when TCM put it on their Halloween schedule! Imagine my disappointment when I learned that I was to watch forty-five minutes of production stills and title cards.

There are a large number of high quality photos of the production and the producers did a fair job of combining them with new title cards and a better than fair score. However, the stills were frequently reused causing the story to became muddled. A noble effort for the materials at hand, but it came off as cheesy at times.

Interesting to film historians and recovering philistines like myself, but fairly hard to watch by any measure. If you have difficulty with movies that don't talk, movies that don't move is a non-starter. Glad I watched it, I suppose, and will wait for a copy to be rediscovered. Check your attics! AMRU 3.
Posted by Fred Theilig at 12:13 PM No comments:

Local milquetoast aspires to be a detective. He investigates the case of a missing millionaire at an abandoned sanitarium.

This mediocre horror-themed comedy appears inspired by, but not nearly as good as, Buster Keaton's Sherlock Jr. Lon Chaney doesn't appear until a half hour into the movie and isn't given much interesting to do. There's fair atmosphere and some amusing haunted house gags, and did hold my attention for the duration, but it's simply not horror nor is it an exceptional comedy.

Posted by Fred Theilig at 9:51 PM No comments: 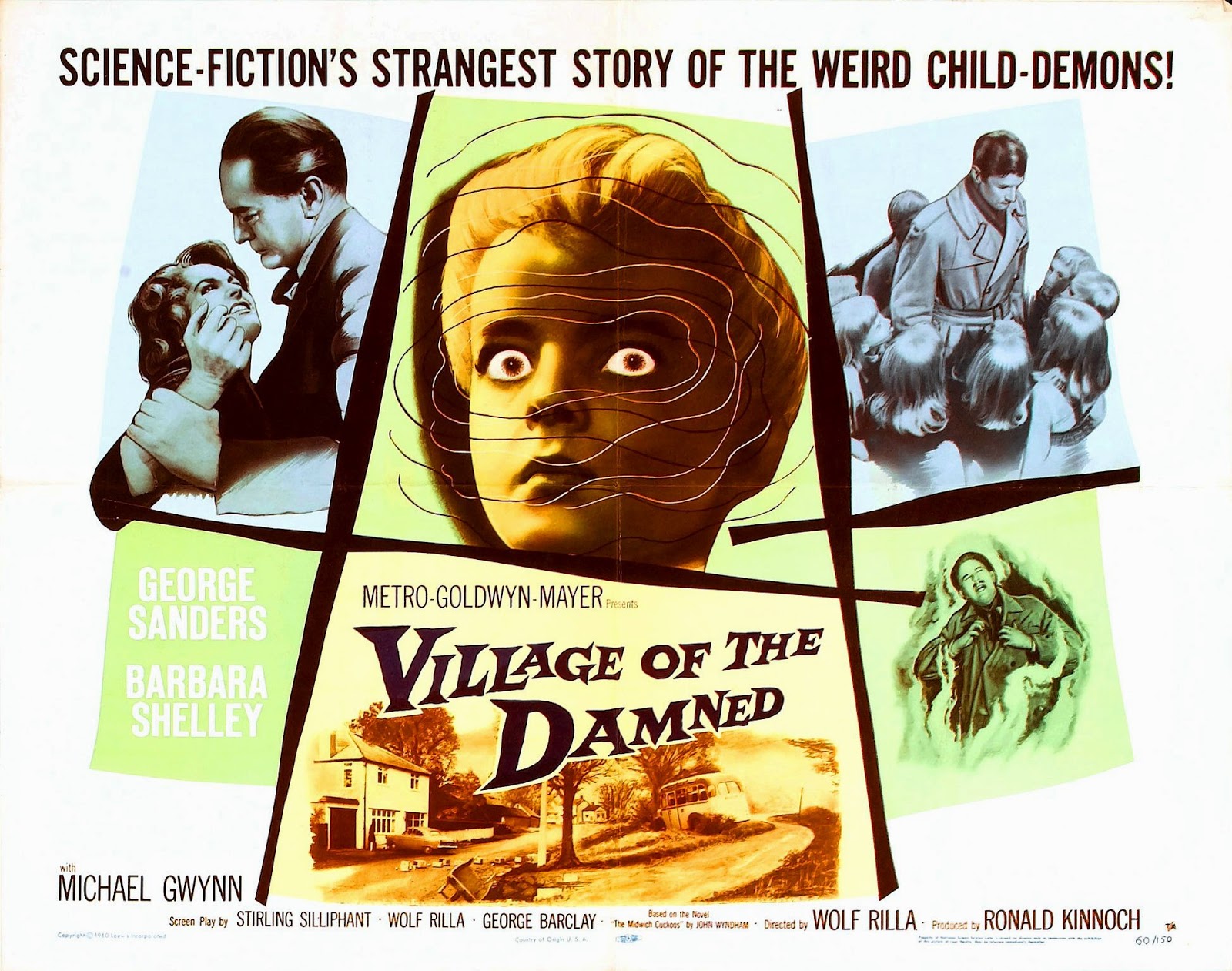 Without warning, all of the citizens of a small English village mysteriously pass out. When they awake, many of the women find themselves pregnant. Months later, they all give birth to blond haired, creepy eyed, gifted children.

Village of the Damned proves that money is not required to make a quality movie. Not even a quality science fiction movie. Devoid of big name actors or special effects, Village of the Damned cost either $200k or $320k to make depending on the source, a pittance even for 1960. They relied on quality actors, an excellent story, and a solid script.

Science fiction films are sometimes very bad with the science. No so here. When something is left unexplained, they at least analyze it intelligently. Also, mysterious pregnancies like these would raise serious societal questions. Infidelity? Virgin births? Promiscuity? While these angles never become the focus of the story, they are not ignored. Items for us to consider are exactly how were the woman impregnated? Invisible magic or molested by an unseen beast? That was left to our imagination.

Village of the Damned is a very well crafted movie. Better horror films were released the same year, but few low budget movies of the era can compare. It has a smart script and creepy story and delivers on all promises. AMRU 3.5.


"You have to be taught to leave us alone."

Posted by Fred Theilig at 6:58 PM No comments: