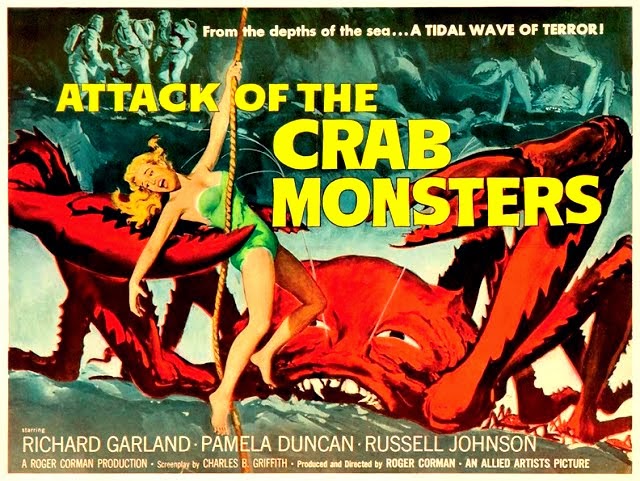 The Navy brings researchers to an island with an abandoned research facility. The previous occupants disappeared with no trace. What could have happened to them? Spoiler alert: they were eaten by crab monsters.

Well, the island experiences strange earth quakes, giant holes in the ground open up, and they start to hear the ghostly voices of their departed colleagues. It seems that when the crabs eat people, they gain their knowledge. How did they get so mutated? Atomic radiation. Oh, yea. That old chestnut.

I watched this for one reason only. On my way home from work I heard of the death of Russell Johnson, the great Professor from Gilligan's Island. Dedicated readers will also remember him from This Island Earth and It Came from Outer Space. He was a hard working actor, all around nice guy, and a bone fide war hero, earning the purple heart during World War II. But enough about Russ, back to the movie.

If goofs are your thing, then you are in luck, because goofs are this movie's thing. It would be tedious to mention them all (IMDB lists only seven). Let's take an early scene as an example. Within a yard and a half of shore, one of the Navy doofs falls out of the boat into very deep water. There he sees a giant crab monster and swims frantically to the surface. When the other doofs bring the obvious mannequin back on board, they discover it has no head. Forgetting for the moment that it should have been his feet that got chopped, the rest of the cast act as if this was a regrettable accident and don't find his decapitation all that shocking. Maybe the crabs get stupider as they eat them.

Typical Roger Corman material. Mediocre acting, terrible accents, clumsy scenes, substandard script, forgettable story, but otherwise watchable. Corman is famous for spending $100,000 and grossing a million. But if he could spend $110,000, still earn that million, and make something worth remembering, he wouldn't hesitate to pocket the ten grand. I have a hard time respecting that. Still, maybe because of my fondness for Johnson's Professor, I enjoyed Crab Monsters. Foreshadowing his later role, Johnson even makes a radio out of the unlikeliest of materials: radio parts. Go figure!

Watchable, short, and dumb. Today I give it an AMRU of 3. Rest in peace, Russ.
Posted by Fred Theilig at 12:25 AM No comments:

I missed doing a year-end wrap up last year and I didn't want that again. Let's start with the movies I actually saw in a theater: Star Trek Into Darkness and Jurassic Park in iMax 3D. Yup, that's about it. Not bad. Laura Dern is a terrible actress. Maybe I saw The Hobbit. Not sure if it was in December or January. 30 minutes shorter would have been 30 minutes better. Now onto the state of the blog.

The 45 posts represent 44 movies. While I might be disappointed at the low number, I'm not. I think I hit a relatively good quality of movies. While only seven were rated at 4.0 (and none higher), only six got failing grades. I completed the original Universal Horror collection (with the exception of The Mummy series - can't find a copy of The Mummy's Tomb), I explored my interest in Val Lewton, Russ Meyer, and William Castle, Ray Harryhausen, Lon Chaney, and the Marx Brothers. I did good work on the 50's rocket and saucer sub-genre, and saw Jane Fonda's ta-tas back when that was a good thing. Not a bad bunch of films, if not exactly a film student's dream list.

29 of the 44 were either Sci-Fi or Horror, two were musicals (although I didn't initially classify Duck Soup as such), and the three silent films fared way better than the three exploitation films. I think I'll do more of the former and less of the latter. Musicals will continue to be sparse.

Many of the year's winners were flawed gems: Earth vs. the Flying Saucers, Carnival of Souls, The Leopard Man, and Laugh, Clown, Laugh. Good, enjoyable, and imperfect. The best movie, from the traditional viewpoint, was The Bridge on the River Kwai, the year's only Best Picture. The biggest surprise may be Valley of the Dragons. Not that it was all that great, I just had rather low expectations. Daughter and Son of Dracula were also better than I expected. Son of particularly because Creighton the Crappy was in the lead. Biggest disappointment was Things to Come. It wasn't the worst, but I had heard of it and it's an H.G. Wells film for cryin' out loud!

I've taken to hitting documentaries whenever the mood strikes me. Girl 27 was a complete fraud and a total disappointment. Mary Pickford: The Muse of the Movies was an overly glowing portrait of the actress. I don't know much about her and not sure that changed any. I watched Lon Chaney: Behind the Mask and learned nothing of the man. TCM ran a Bio and I learned loads. I forget what, however. I've mentioned The Story of Film: An Odyssey and still recommend it greatly. Watch it quick before Netflix pulls it. The Celluloid Closet is a great look into gays in film. I saw it years ago and made a point of seeing it again. TCM is great for that stuff. I've seen more, I'm sure, but nothing else comes to mind.

When I began this journey all I really had was the local library and hand-me-down tube televisions. Now I have Netflix, Amazon Prime, TCM (my best source), and a TV that does YouTube. I have a Roku in the bedroom that has many channels for public domain films, though I don't frequent there often. I seldom hit the library at this point. Not much room for improvement there.

My expectations for 2014 (as far as the movie blog is concerned) is to get back to the 50 post plateau. I hope to hit more "classics" and go lighter on Sci-Fi/Horror. Let's see how that goes. After my Halloween Horror fest, my plan was to hit some classic romantic comedies, but I found it hard to get excited about that topic. I think I'll be opportunistic and grab what tickles my fancy for the time being.
Posted by Fred Theilig at 12:21 AM No comments: