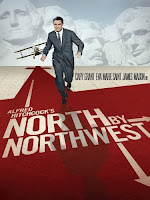 Aging playboy (Cary Grant) marketing executive is kidnapped when he is mistaken for a spy. When he refuses to cooperate, they waterboard him with scotch and try to orchestrate a car accident. He gets away and is arrested for drunk driving, but nobody believes his story (not even his mom, the bitch!) On the run from police and criminals alike, he meets up with a young hottie (Eva Marie Saint) who helps him even though logic would demand otherwise. With her help he heads in some ordinal direction that escapes me at the moment to look for his doppelganger spy.

This Hitchcock thriller was very thrilling in a very Hitchcockian sort of way. Cary Grant was at his Cary Grantiest. Old friends Leo G. Carroll (at no point over a barrel) and James Mason had important rolls. Is Mason an old friend? Perhaps not. This is the first thing I have seen him in. Who knew?

North by Northwest is a great piece of entertainment that was expertly crafted. The photography was wonderful. Thrilling to the end. Think it will stand up well to a second viewing. If not for the story, then for the cinematography. AMRU 4.


Eve Kendall: Patience is a virtue.
Roger Thornhill: So is breathing.

Posted by Fred Theilig at 10:31 PM No comments:

Howard Beal (Peter Finch) was once a respected name in TV news. But a string of personal set backs and slipping ratings placed him at a crossroads. After being told he was being fired, he announced on the air that in one week he would kill himself. When he spoke honestly and profanely in his later apology, and the rating were through the roof, a power struggle started to keep his "mad profit of the airways" act running for as long as possible.

Network is an amazingly prescient movie. A cautionary tale that caused the news media to look up and say "what a great idea!" If writer Paddy Chayefsky thought the industry was becoming sensationalized, well, he hadn't seen anything yet. And he almost hadn't. He would die of cancer five years later.

Jimmy Stewart was considered for a role? I presume the William Holden part, but really? I can't imagine him trying to charmingly bumble through Holden's cutting and profane dialog. That would have been a movie-killer. Finch's performance earned him an oscar but he would die before the ceremony. The first posthumous award.

Iconic, witty, wonderfully acted (four acting oscar nominations, and three wins), and overall excellent filmmaking. Faye Dunaway was fantastic. This movie will stay with me for a long while. AMRU 4.


"Why is it that a woman always thinks that the most savage thing she can say to a man is to impugn his cocksmanship."

Posted by Fred Theilig at 9:16 PM No comments: 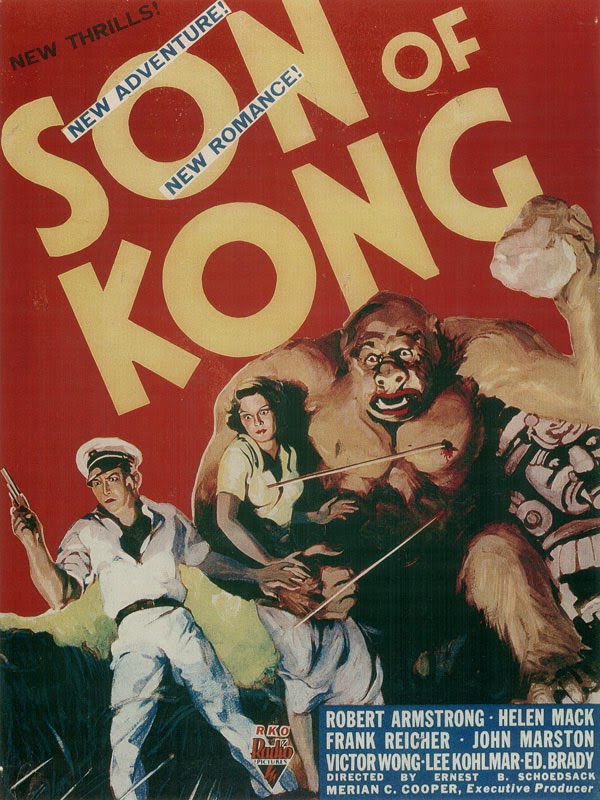 Promoter Carl Denham (Robert Armstrong) discovers that being responsible for a giant ape going on a rampage in New York City raises some legal issues. Jeeze, it's been a month! Aren't they over that by now? He and his former captain decide to high-tail it out of Dodge to make their living on the high seas. At their first port of call they meet young hottie Hilda whose father was just murdered and wants to get away, as well as neer-do-well former captain Helstrom who also wants to get away because he just murdered someone. He convinces Denham to return to Kong Island with the old "But what about the treasure?" ruse. It totally works.

Fearing a repeat of their last visit, the crew abandons the above four people along with the Asian cook stereotype on the island. There they meet hostile natives (also not keen to repeat what happened last time) and prehistoric creatures (who have no opinion on the party, but were just hungry). Soon they discover that Kong had a son who was good-natured, twelve feet tall, and white. Read into that what you will. They rescue Sonny Kong from quicksand and in return he fights each stop-motion monster that comes their way. Denham and hottie continue looking for the treasure because they aren't too quick on the uptake.

Upon success of King Kong, the studio rushed the sequel into production. It was given half the budget (all of which went into the stop-motion effect) and hit the theaters by Christmas that
same year. While the special effects weren't a step back from the original, it most certainly was played for laughs. You totally get an Island of Misfit Toys vibe here.

Young Hottie Helen Mack continued to play the young hottie for as long as she was either one or the other. Asian cook stereotype Victor Wong made a career playing Asian stereotypes. Armstrong and Reicher both had long, productive careers but would only be remembered for their previous film.

Short, concise, and amusing. In many way not a worthy follow-up to the legendary original, and by no means a must-see, but you have to respect it for it's brevity (65-70 minutes). Tight in scope, it's the after dinner mint to the Kong banquet. Expect nothing more. AMRU 3.
Posted by Fred Theilig at 7:43 PM No comments: