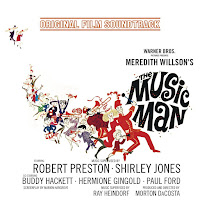 Travelling salesman (Robert Preston) comes to River City, Iowa to sell the townsfolk band instruments, planning to be gone before they figure out he has no idea how to lead a band or teach music. He sets his eye on the Librarian/music teacher (Shirley Jones) who he learns had made brazen overtures to a much older philanderer/philanthropist. The sadder but wiser girl for him. Things, however, don't go precisely as planned.

Actor Timmy Everett (Tommy, Great Honk!) went on to appear in two episodes of Ben Casey, then call it a career. Fourteen years later he would be gone. In contrast little Ronnie Howard would go on to do everything on earth. Hermione Granger of Potter fame was named after the actress playing the Mayor's wife, Hermione Gingold, in that the actress was named in 1897 and the character was named several years after. Yea, let's go with that.

There is a camp site at scout camp called Wells Fargo thus my boys knew the associated song. My wife and I decided to force them to learn where it comes from. In the process, they found out where Peter Griffin got Shipoopi.

The Music Man is a charming and wonderfully performed film with few faults. The finale isn't contrived or ex-machina in any way. There are no lulls or noticeable weak points, although Hackett's musical number comes close. This film is chuck full of memorable lines, great performances, and charming scenes. Truly, a landmark of Hollywood cinema. AMRU 4.5. Shirley Jones was adorable.


"You watch your phraseology!"