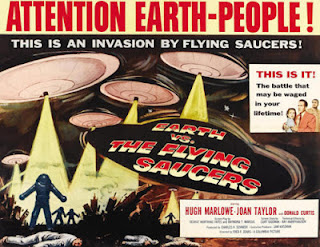 A flying saucer buzzes a scientist and his hot young wife on the way to work, and delivers a critical message. That message was that space aliens want to take over the Earth, but are tired of the whole "lay waste to society" business, so wouldn't it be much better if you give up before we start? Tragically, Dr. Marvin (Hugh Marlowe) doesn't understand the message.

Well, Dr. Marvin's day job involves sending up rockets all day long even though some mysterious force keeps shooting them down. He should ask the saucer people if they've seen anything suspicious.

Meanwhile, back at the top secret military base, a saucer lands thinking it was expected. The soldiers do the predictable and shoot at the space men, which angers our benevolent overlords. They proceed to destroy the base. Except for Dr. Marvin and his hot wife (Joan Taylor), who for some reason are deep underground. They are flown to Washington DC to explain their silly Flying Saucer theory. I guess no videotape survived.

I watched EvtFS two days before I learned of his death, so when NPR said "Today we remember a pioneer in stop motion animation" I didn't think to myself "I wonder who that could be?" All of the extras on the DVD except maybe the one about the blacklisted and uncredited screenwriter gave extensive praise to Ray. Not only were the saucers his work, but when they would destroy the library of congress or the Washington monument, he was there too. Apparently he was cheaper than a four foot model and a small explosive charge.

Harryhausen apparently called this the least favorite of his films, and I am guessing he was referring to the buildings. Stop motion works for alien creatures and space ships, but the capitol dome blowing up looked more than a little cheesy. Only a guess. I'll see if my library has his book.

A quick word about the leads: Marlowe was the douche-bag boyfriend five years prior in The Day the Earth Stood Still, but now he gets to be the Hero-Scientist. Hottie Taylor also starred in my next Harryhausen movie: 20 Million Miles to Earth. I presume she'll be just as hot. Well written, well acted, excellent pacing, this is a winner in the genre. And when compared to the extremely similar Invisible Invaders made three years later, the latter is revealed as even more of a stinker. AMRU 4.

I'm going with two quotes. One from the movie, one from our pinko-commie screenwriter. See if you can't figure out which is which.


"When an armed and threatening power lands uninvited in our capitol, we don't meet him with tea and cookies!"

"The action by the guild [restoring some of his writing credits] comes about 40 years too late to help my Hollywood career. I sure am angry at the way I was treated by all the major studios. They blacklisted me, and I couldn't get any work in this damn town."