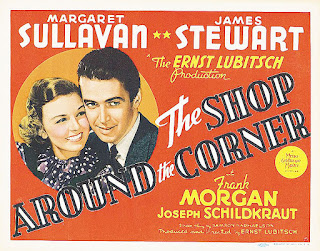 The lead salesman (James Stewart) of a small shop in Budapest is trading letters with a woman from the personals and falls in love. Turns out, she’s the new sales girl he can’t stand. Oh, spoiler alert! I got that in in time, right?

Frank Morgan, aka The Wizard, is the shop owner with personal problems. He’d die before he reached 60. Old friends may remember Felix Bressart as a Russian from Ninotchka, or Greenberg from To Be or Not To Be. He’d die before he gets as old as Frank. Margaret Sullavan played the love interest. She’d die before she got my age. Errand boy William Tracy younger still. So it goes.

The Shop Around the Corner is a Christmas romantic comedy, but don't let that fool you. It’s an interesting, layered story and well acted. There is action outside of the love interest, but it never becomes cluttered. It's clever, witty, and charming. Director Ernst Lubitsch built a world that feels complete and inviting, and the events that transpire inside have weight and meaning. I can’t say I’ve ever not been pleasantly surprised by his films. AMRU 4.


"Doctor, do I call you a pill-peddler?"