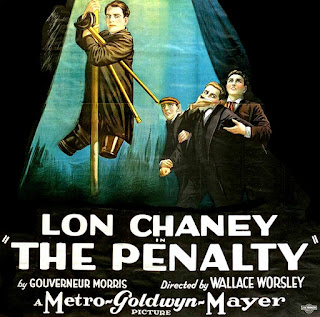 A young doctor makes the fateful decision to amputate the legs of an injured boy. His mentor sees that the younger doctor has made a rash decision but covers for him to the parents. But the boy knows the truth and grows up to be an evil criminal mastermind, bent on revenge.

Lon Chaney had his lower legs bound to achieve the illusion of being an amputee. Although he could not have them bound for more than ten minutes at a time, the illusion was quite successful. And his character was quite evil.

I waffle on calling The Penalty horror. I have a clear definition that grows muddier as time passes. An element of the supernatural is needed and regular old evil just won’t do. Chaney’s evil, however, is something special. Normally one can identify with his characters, even if just a little. Compassionate, flawed, and tragic. Here, not so much. Maybe as a boy who just lost his legs, but not during in the story proper. He bad.

Ethel Grey Terry played an agent sent undercover to get close to Chaney’s Blizzard, and there are strange parallels in the two actors real lives. Ethel was born six months before Lon and about four months after he passed she died from “an illness she'd suffered for over a year”, whatever that means. Both were veterans of silent cinema with one talkie credit each. Chaney’s a lackluster remake of a film he had done five years earlier, and Terry’s was a short done with her husband. Crime stories both. Terry’s Husband, it’s worth noting, retired from acting very shortly after her death, never remarried, and would commit suicide on the 35th anniversary of her passing. Chaney’s widow would die three years after him, on Halloween.

The Penalty strikes the right horror tone and Chaney’s performance is among his best. Overall, not among his best movies, but effective. AMRU 3.5.


“He’s gathered up his dance hall girls and he’s put them to work in his house - making hats - thousand of hats.”