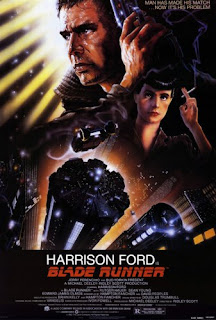 It’s 2019 and replicants (you know, andys) are used as slave labor on off-world colonies. Six escaped during an uprising and head to earth. Rick Deckard (Harrison Ford) is brought out of his retirement to retire them. With a gun. He retires them by shooting them.

Way back in 1982 a fifteen year old me saw Blade Runner in theaters. Somewhat impressed, it somewhat stuck with me. Though I wanted to see it again, especially after the new cuts came out, I never did. When a historic theater presented the Final Cut, I collected my boys and had a night out. Wow, what a difference thirty-five years makes.

I don’t know if it was intentional by Ridley Scott or a problem with theater’s audio equipment, but the rain and trippy-ass soundtrack drowned out the dialog, making it hard to follow the story. I don’t know if that mattered much in the end. It’s not really a dialog-driven film, but still.

There are quite a few versions of Blade Runner floating around. The initial US release was severely tampered with by the studio to make more sense to a dim-witted US audience (a dim-witted fifteen year old me appreciated it), and then were different edits for various releases around the world. Scott’s original edit was found in the ‘90s and erroneously called the director’s cut. Back in aught seven Scott made a real director’s cut and is considered the definitive version.

Blade Runner is an immerse experience. Not all details of this world are explained onscreen and it would have been a terrible idea had they tried. The principle question it asks is what does it mean to be human. That's not as straight forward as it might seem as Deckard meets a replicant (Sean Young) that does not know what she is. And we have reason to believe Deckard himself may also be a replicant.

The case for this is somewhat tenuous. Deckard has a unicorn flashback and Gaff makes an origami unicorn to apparently tease him, implying it’s an implanted memory. Others have theorized that the Unicorn represents the replicants: real but not real. Director Ridley Scott was vague and mysterious about the question saying “He is definitely a replicant”, so take that for what it’s worth. I haven't seen 2049 yet, so NO SPOILERS!

The Blade Runner world is amazing. Expansive, expressive, familiar but not really. Neo-noir at it’s finest. It just may find its way into my library. AMRU 4.5.


“I've seen things you people wouldn't believe. Attack ships on fire off the shoulder of Orion. I watched C-beams glitter in the dark near the Tannhauser gate. All those moments will be lost in time... like tears in rain... Time to die.”