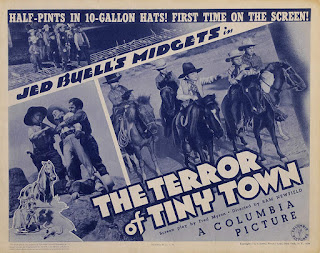 The Villain Bat Haines plays two ranches off each other so he can rustle cattle from both sides. Oh, and everybody are dwarfs.

This low budget exploitation flic was inspired when the producer overheard someone saying "if this economy doesn't turn around, we'll have to start making pictures with midgets." The result is a film with little value beyond this novelty.

Many little people in films of this era sport thick Austrian accents. Hollywood apparently put out word that they were hiring and they didn't need much encouragement what with racial purity being on the march.

While the majority of the cast lacked acting talent, our hero (Billy Curtis) had better than fair horsemanship skills. His physicality was noticeable compared to the rest of the cast, who had difficulty with the full sized set. They rode ponies and Curtis being tall for a dwarf (4’2”) seemed over sized on his mount. His love interest, if IMDb is to be believed, celebrated her 101st birthday in January.

I felt a few of the actors appeared to be children, and I discovered that I wasn’t too far off. Fern Formica (that cannot possibly be her real name) would have been thirteen when the film was released, making her randy barroom song all that more inappropriate.

Poor acting, throw-away story, and bad diction. Other than the actors short stature and the films short run time, The Terror of Tiny Town has little to offer. AMRU 2.5.