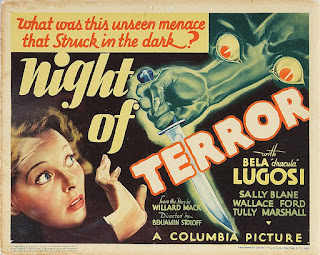 A maniac is killing people with a comically large knife and the police are hapless to stop him. Not a typo. Now the killer is near the Rinehart estate where lots of other things are going on.

Old man Rinehart has a strong willed daughter who insists on going the the theater with random newspaper reporters despite the presence of a killer in the neighborhood, and a nephew Arthur who is working on a groundbreaking discovery that save countless lives. A serum that will allow someone to live without oxygen for several hours without harm. He has an experiment planned where he is buried in a coffin for eight hours to prove it works. Also, nephew and daughter are engaged. #FAMILYSECRETS.

Well, our friendly neighborhood maniac offs good ‘oll dad and random-other-guy and the police come in for more comic relief. Once finished bumbling, Artie goes on with the experiment. That very night! No need for grief to wreck your plans. Enter the household is dad’s brother and niece, heirs to the Rinehart estate. Also we learn that the house servants are included in the will, making them suspects. First is the fearful stereotype chauffeur, whom we can dismiss because of his fearfulness. Also are Degar (Bela Lugosi) and Sika who seem not to have a role to play except to behave strangely. The Bela Lugosi character is particularly suspect because he’s played by Bela Lugosi.

But we don't seem to need another suspect. We see the maniac murder people, seemingly out of the sheer love of murder, but we know that there is. The reporter, would be love interest, and sexual assault perp (I calls them as I sees them!) is played by Wallace Ford, whom old friends may remember as a clown in Freaks (1932). Ingenue Sally Blane played ingenue Mary Rinehart. Mr. Maniac is played by Edwin Maxwell, mostly, maybe, we think. Seems that nobody is entirely sure.

Early in the sound era audio equipment wasn’t all that great and the quickie B pictures like this didn’t get to use the best the studio had. As such the actors had to annunciate at the top of their vocal range just to be picked up, and we get a fairly difficult to watch film. The scratchiness of the print made matters worse.

What partially saves Night of Terror is the better than fair ending. Everything is bundled up nice and neat. Plus we have Lugosi near the top of his game. AMRU 3.