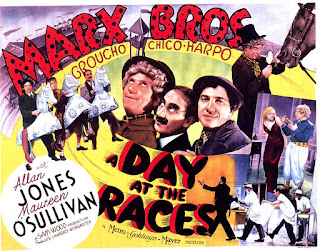 Pretty Judy (Maureen O’Sullivan) runs a Sanitarium that is short on cash. The bad guys are trying to buy her out so they can open a casino to go with the horse track next door. Her singer boyfriend blew all his cash on a racehorse, so he’s no help. Tony (Chico) tries to convince rich inmate (Margaret Dumont) to invest but she is obsessed with a doctor Hackenbush (Groucho) she saw in Florida. So Tony (Chico) sends a telegram inviting Hackenbush (Groucho) to visit. He does but unbeknownst to everyone, he’s a horse doctor. Harpo (Stuffy) is also there but he doesn’t have much to say.

Much of the manic tone and unconventional style of their earlier work is toned down for A Day at the Races. Groucho behaved less like a psychotic disconnected with what’s going on around him and more like a real person. He knows he’s a fraud and cares what happens to Judy. The end result is more importance felt for the situation Judy finds herself in and the comedic bits feel that much funnier. I can’t be sure if this tonal shift is due to Hollywood slowly reining the brothers in or if maturity was creeping in. Either way, it is a welcome change.

The most manic scene is where Hackenbush (Groucho) is forced to examine Mrs. Upjohn (Dumont) by an actual physician and he stalls with the help of Tony (Chico) and Stuffy (Harpo). It’s absolute insanity and it wouldn’t have had the same impact had the stakes not been high.

For me, this is the best Marx Brothers film so far. Producer Irving Thalberg died tragically at age 37 before filming wrapped and Groucho stated that he lost interest in making movies. I hope this doesn't bode ominously for the remaining films, but I already know a couple are stinkers. AMRU 4.


"If you're looking for my fingerprints, you're a little early!"