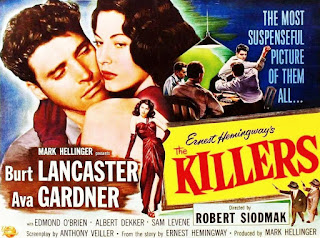 Ok, so I watched The Killers (1946) because I confused it with The Killing (1956). Get your yuks out now. Both are film-noir and both highly rated. Killing was on my radar because it was directed by Stanley Kubrick but Killers should probably have been as well.

Lancaster was not the producer’s first choice. An ex-acrobat who learned acting in the USO, he had zero screen credits. Choices one and two were unavailable, so they went with the 32 year old complete unknown. When the rushes came back they realized they made the right choice. Top billing in his first Hollywood film and a star is born.

Adapted from an Ernest Hemingway short story, it was the only adaptation he personally approved of, although much of the film is original. Maybe that’s why it centers around the Killed and not the ones who did the Killing. Ava Gardner played the femme fatale whom we all remember from The Barefoot Contessa and nobody remembers from Shadow of the Thin Man. Killers is her highest rated film but I am curious to see Night of the Iguana, if for no other reason than because it has a cool name. Edmond O’Brien plays the investigator. He also was in Contessa, and in Seven Days in May with both Burt and Ava. He shows up in quite a few films I’ve seen and want to. I will keep an eye out for him in the future. Phil Brown plays a small speaking role. If you’re unfamiliar then someone must have taken you to Anchorhead and had your memory erased.

All in all a very interesting story. Told in chronological flashback, Swede’s story holds your interest and the ending pays off. It’s a well done noir and worth a second watch. AMRU 4.


“Don't ask a dying man to lie his soul into Hell.”