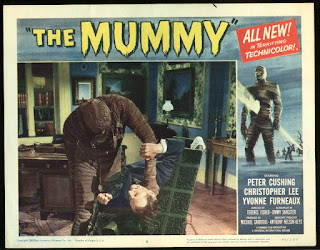 A noted archaeologist plunders … I mean excavates the tomb of a beautiful Egyptian princess. While his young son (middle-aged Peter Cushing) nurses a broken leg, an Egyptian in a fez warns dad not to desecrate the burial site lest he incur the wrath of Karnak. But desecraters will be desecraters. Dad is alone in the tomb when something happens and he spends the next three years in a home for the mentally disordered (been there). Finally dad explains that he was reading a Scroll of Life he found when a mummy came out of nowhere and attacked him. The game is afoot.

I have never been too charmed by these Hammer horror updates. They are a brightly colored, slightly sexy and bloody, simplified versions of the originals, and The Mummy is no different. What they add in blood and cleavage they lose in creepy atmosphere. Here the story elements are mostly stolen from various Universal Mummy films with little new added. So, why was I so immensely entertained by it? The best reason I can figure is that after watching The Love Wanga, the high quality print, bright set pieces, flowery language, and decent acting was a very welcome change. There was no question how the story would end, only the details.

Once again Christopher Lee plays the monster while Cushing plays our hero. Kharis is doomed to stand guard over his beloved Princess because he tried to use that very same Scroll of Life to bring her back after she was embalmed, and if you saw the sexy, sexy embalming scene, you’d understand. Gosh, is Cushing’s lovely bride the spitting image of Kharis' long dead Princess? Of course she is.

Lee looks great at the Mummy. Distinctive from the Universal movies and downright menacing. Sure, the ending is dumb and it has the cleanest, least ornate, and most brightly lit ancient tomb on film, but I loved every second of it. The Mummy is by no means a great film. IMDb rates it lower than the Frankenstein and Dracula efforts, but based on my reaction on the night I watched, I rate it a bit higher. AMRU 4.