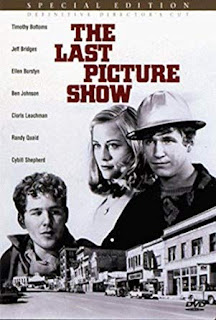 First off, wow the cast is amazing. Our three principal characters are played by Jeff Bridges, Cybill Shepherd, and some other guy. Supporting actors include Ellen Burstyn, Eileen Brennan, Randy Quaid, Ben Johnson, and Cloris Leachman. Each hint at interesting back stories we don’t fully explore. I can imagine a TV series that slowly explores each character over many seasons. There’s also a movie house but it serves only as a metaphor.

Everyone has secrets but secrets are not kept long in a small town. Our protagonist Sonny finds this out. In the end people grow up, move on, and occasionally die. The Last Picture Show is a fascinating film. It has a different look and feel than films that came before. It wouldn’t be right to say that nothing ‘happens’, but there is no big story arc. Just stuff and its consequences. Nothing happens but in fact, everything happens. Think American Graffiti if it were completely different.

The Last Picture Show is a remarkable film and I’ve done a poor job selling it. So if my description doesn’t convince you, at least watch it for Cybill’s pool scene. AMRU 4.