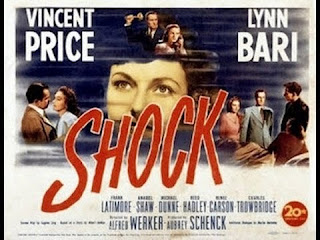 A young wife, waiting for her recently released POW husband, checks into a hotel to advance the plot. Believing him dead for years, she becomes distraught when his arrival is delayed. Out on the balcony she witnesses an argument in another apartment that ends in murder. This shock puts her into a catatonic state. As luck would have it, a specialist (Vincent Price) happens to be staying at the same hotel and has just finished murdering his wife. This is a very delicate case. Better bring her to the sanitarium.

No mystery here as it never occurred to the filmmakers to play the ambiguity angle. Did she really witness a murder or was it all a delusion? Nope, she totally did. It’s just a matter of how everything plays out, which seems pretty obvious from the onset.

Our damsel in distress, cute Anabel Shaw, went on to do, well, fairly little else. She had a forgettable role in Gun Crazy but here she pouts her way into our hearts. Price is great as always in a very early villain role. If not for him, and the film’s short running time, I would not have considered watching it. Still, probably shouldn’t have.

The Amazon Prime film quality is quite poor. Rumor has it that there is a crisp version out there someplace, but I don’t think it would have helped. This is a slow moving, low budget, non-thrilling thriller that wastes a good Price performance. AMRU 2.