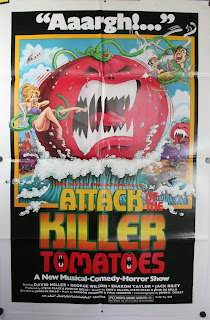 Tomatoes, the garden variety kind, start killing people. Let me stop you right there. You’ve already thought about this film more than it deserves.

Super low budget film made by complete amateurs. Most principles involved have few other credits, and mostly ones that feature murderous produce. A popular cult film, I likely saw it in the 80’s but remembered little. I remembered giant tomatoes, dumb jokes, and bad acting. Well, maybe I did remember something. There really is little else here.

An early scene shows a helicopter crash that clearly was unintentional. Apparently, the loss of the rental cost about two thirds of the film’s entire budget. Good thing they got the shot. The actors improvised dialog while pulling the pilot to safety. Yikes!

In the subgenre of low budget dumb comedy, think what was the lowest budget and dumbest comedy you ever saw. Now know that Attack of the Killer Tomatoes is it’s king. The jokes include a Japanese character (being clumsily dubbed ala Godzilla, of course) knocks a picture of the USS Arizona into an aquarium. Or a paratrooper who spends the entire movie running around in his jumpsuit with his chute out. Pop culture references standing in as jokes, and silliness for silliness’ sake. I mean, the main character is named Mason Dixon.

Based on a short film, I think the filmmakers were trying to channel the spirit of films like the much higher budgeted and professionally made Rocky Horror Picture Show. Here's an interesting fact: the terrible music in the film was performed by a teenaged Matt Cameron of Soundgarden and Pearl Jam fame. That's all I got for trivia.

I found Attack of the Killer Tomatoes hard to watch. None of it was funny, clever, or particularly interesting. It tried hard to be ridiculous rather than coming by it honestly. No point of view, no commentary on current events, just mindless foolishness. That said, my son liked it. AMRU 2.
Posted by Fred Theilig at 11:03 PM