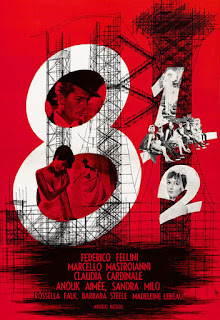 Movie director Guido (Marcello Mastroianni) is working on his latest film but nobody seems to know what it is about. Guido deals with studio people, difficult actresses, his mistress, wife, and a rich fantasy life.

8½ is a masterpiece. Everyone says so. But the problem with a subtitled film (especially one with overlapping dialog) is that you spend more time reading and less time observing the context of the conversation. And at two and a quarter hours, this dance becomes tedious. I may have napped.

In a perfect world I would watch each film twice, several days apart, preferably with someone to discuss it with. I have no such luxury. Many films would have benefited from this tact, 8½ in particular. It is hard to take in all that is going on, but what I did take in was bizarre. Guido has these issues, personal entanglements, and demands on his time. He slides seamlessly into and out of fantasy, and sometimes it’s hard to determine which is which. All the while, the film doesn’t appear to be getting any closer to completion.

Guido is Federico Fellini. This was an examination of his life and his creative process. Maybe an indictment of both, hard to say. Second billed Claudia Cardinale was radiant and barely in the film. Old friend Barbara Steele had a small role as someone else's trophy girlfriend.

I didn’t actually miss any of the film, having stopped it prior to my snooze. 8½, though, must have a second viewing. There it so much to take in. I felt each conversation had context and nuance I wasn't 100% picking up on. I will watch it again. I may still not completely understand it, but I'll get out of it what I can. AMRU 4.