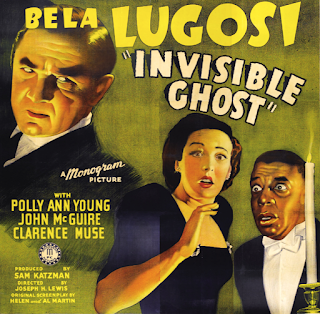 Seeing the wife who ran off on him, standing in his lawn causes Bela Lugosi to go into a trance and kill people.

Let me get this straight. The rich and influential Charles Kessler is so traumatized by his wife leaving him that he won’t leave the house in case she returns. Even though people are being murdered inside the house! Next we learn that the gardener is secretly hiding her in the garden shed for who knows what reason. She was hurt in a car accident that killed her lover and is now in a semi-vegetative state. So each night she leaves the shed and stands in the lawn, magically compelling Bela to the window, causing his murderous trance.

That’s not a spoiler. This is all established early. And he is Bela Lugosi after all.

None of this makes any sense. But taken as read, how terrible must the cops be if multiple people are murdered inside a house and none of the occupants are even suspected? There were at least two murders prior to the film’s beginning. No checking for forced entry, securing perimeter, nothing that even resembles police work. Just “Gosh, we’re stumped!” In fact Bela and another possible suspect seem to drive the investigation, finding evidence and deciding how to proceed.

It took me a while to realize that I’ve seen this one before. The year before my blog I watched a bunch of films that were never covered. This was one. It should be no mystery how I forgot about it, this being squarely in Bela's Nick Cage phase of role selection.

Invisible Ghost lacks atmosphere, mystery, and runs short on drama. It really feels like they started filming with a partial script and were winging it much of the time. The best thing I can say is that it is short and isn’t painful to watch. In fact, Bela as a genuinely nice guy who has no idea he’s the murder is a unique angle. I just wish there was a story to go along with it. AMRU 2.5.