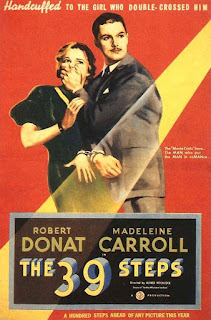 Regular everyman leaves a show when someone fires a gun. In the rush a strange woman asks to go home with him, and she does. Turns out, she is some sort of spy and needs to hide out for the night, safe in his apartment. Well, maybe not too safe. Our hero travels to Scotland based on her vague explanation. Cops want to arrest him, bad guys want to kill him, and the nation’s security hangs in the balance.

Hitch’s follow up to his successful Man Who Knew Too Much, The 39 Steps solidified his reputation as a hit maker. Similar in tone, both films feature the ordinary man in extraordinary circumstances, a theme he would repeat many times. Also on display is his love of trains and hot blonds.

Hitchcock directed 58 films including a few collaborations and an incomplete film. This is my twentieth and I have maybe five more recorded, so running out of Hitchcock films is not a far off reality. Many of his early silent films, if not lost, are hard to find.

The 39 Steps has a more than passing resemblance to It Happened One Night, both featuring a couple who don’t care much for each other, travelling with some danger. The story is different but the vibe is similar. Happened is clearly the superior film but 39 Steps is also fun to watch. There are a couple plot holes that I admit vexed me while watching, but I got over it. AMRU 3.5.