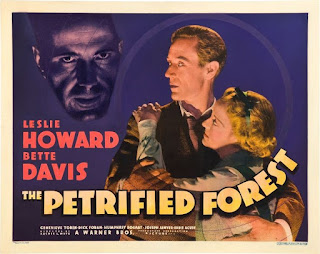 This is the film that gave Bogart his big break. The weight of the world visibly rests on the shoulders of Bogart’s Duke. He seethed danger and desperation in what otherwise could have been a very stock character. Howard insisted on the casting of Bogart over Edward G. Robinson allowing the world to see what Bogart was capable of. Bogart named his second child with Lauren Bacall after Leslie. Luckily, she was a girl.

The Petrified Forest is a case study character. Bette is the star but our three foils (you can have three!) are Alan, empty-headed jock, and Duke. Each, through their words and actions show what kind of person they are, what motivates them (respect, a woman), and what they are willing to sacrifice. Slowly their character is revealed: Talkers, doers, pretenders, and desperadoes. Duke speaks fairly little and Alan quite a bit. And the Petrified Forest itself becomes a symbol for all three men. What they are afraid of, what they will become.

I had skipped over this film because the description doesn’t do it justice. I could not have been more wrong. It’s a very wordy film (Alan won’t shut up for a second) but I found every minute of it charming. Great acting, excellent dialog, and directorial restraint not seen much today. AMRU 4.5.


"Let there be killing. All this evening I've had a feeling of destiny closing in."