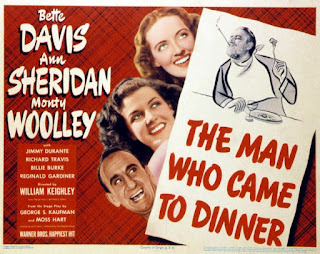 Unpleasant lecturer Sheridan Whiteside (Monty Woolley) is to have dinner with a rich, industrialist family when he slips on ice and hurts his back. He is forced to stay there for weeks and makes their life miserable. Whiteside’s life becomes complicated when his personal assistant Maggie (Bette Davis) takes a fancy to a local reporter and flirts with the idea of moving on from her thankless job. Let the conniving begin.

Films from plays can occasionally be quite entertaining. Clever, fast paced dialog that sometimes skirts the Code, when done right, they can be a joy. Spoiler alert, this one was.

As the Whiteside character hobnobs with celebrities, there is a large amount of playful name dropping throughout the film. They mention Cary Grant and the Barrymores. John Barrymore and Grant both were considered for the Whiteside role (talk about casting a wide net) but Davis objected to Grant and Barrymore was barely able to function at that time, dying just after the film’s premiere. Jimmy Durante played a vaudeville style movie comedian based mostly on Harpo Marx. I wonder if he approved of the caricature.

Ann Sheridan plays the high maintenance actress Lorraine Sheldon. Apparently she was quite popular in films I don’t care for, as I’ve never seen her in anything. The gossamer dress she wore in the film really, ahem, stood out. Towards the end of a very successful career, cancer would take her at age 51. I used to be 51.

I quibble with aspects of the ending but The Man who Came to Dinner really is a joy to watch. Solid script, tight performances, and a well done production. AMRU 4.


“Nobody's home! The Stanleys have all been arrested for peddling dope! Go away!”