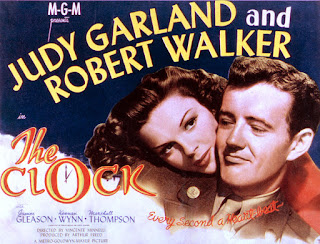 A serviceman (Robert Walker) in New York on a 48 hour leave bumbles into a young woman (Judy Garland) and coerces her into showing him around town. Despite her better judgement and a total lack of chemistry, he monopolizes all of her free time. Will love bloom?

Robert Walker is better known, to me at least, for his performance in Hitchcock’s Strangers on a Train (Criss Cross), whose premiere he barely lived long enough to see. His hyper-innocent lost puppy dog character in The Clock was reminiscent of his upbeat psychopath on the Train.

Judy is a Hollywood legend, one I have yet to fully appreciate. Despite her legend status she appeared in only 34 feature films, nine with Mickey Rooney. I have a couple of her better films on my life list (this is the second of her films I have seen) but a movie-a-day calendar recommended The Clock. Primarily a singer, this is one of only three films where she does not sing. I’m not sure if that would have saved it. Like her co-star, Judy’s life was cut short by a toxic lifestyle. Our two leads would live to the ripe old age of 79, combined.

Prolific character actor James Gleason has a memorable scene with his real-life wife. A veteran of 135 films over thirty years, he has appeared in four films I’ve seen prior. Keenan Wynn had an amusing scene as a drunk. He has popped up in many movies.

I’m just going to come out and say it. Judy wasn’t much of an actress. She was charming and cute, but I don’t see any reason why her Alice would fall in love with Walker’s Joe. In fact there were more than enough red flags. If your relationship begins anything like how this film depicts, run. Fast.

The Clock is a somewhat amusing non-com romance that some will be charmed with, but not me. It drags in parts, lacks an emotional hook, and the leads have no chemistry. Maybe that’s because Judy was screwing the director. AMRU 2.5.