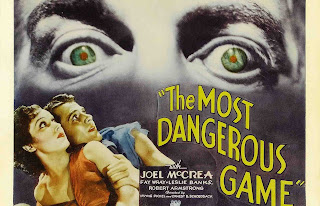 A famous hunter (Joel McCray) is on yet another adventure when his ship crashes into a reef and sinks. He is the only survivor. He finds a creepy mansion owned by a strange man who is also hosting guests who were shipwrecked earlier that week. Something of an epidemic.

Turns out our host is an avid hunting fan but he’s grown bored with regular hunting. He wants to hunt The Most Dangerous Game, and would love to go on a hunt for our hero Bob. With Bob. He wants to hunt with Bob. Yea, that’s what I meant.

The most famous adaptation of the popular short story, we see Hollywood shoe horn a love interest into an adventure story, because why not. Fay Wray and screen brother Robert Armstrong were already on location filming King Kong, so let’s go make another film during the downtime. Some of the same set pieces are recognizable like the log Kong shakes Fay’s rescuers off to their deaths.

Our villain is played by character actor Leslie Banks. He suffered a facial injury during the Great War and used it to his advantage, playing menacing characters to the end. With McCray acting like the handsome piece of wood that was the custom of the day and Wray doing little more than screaming, Banks’ Zaroff was by far the most interesting character. Armstrong played a drunken buffoon. I don’t think it was until James Bond that the stock Hero character was allowed to be at all clever.

Not a super memorable film. It was short and served its purpose. I appreciate that they kept some of the anti-hunting theme from the source material. Zarloff was interesting but we pretty much know how it would all pan out. AMRU 3.