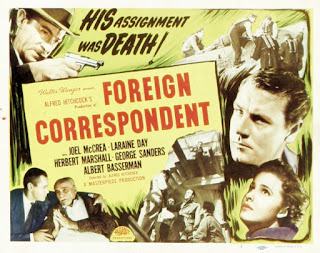 A Newspaper is tired of the bland reports coming from their foreign correspondents in Europe, so the editor decides to send the local screw-up reporter. Solid plan. John Jones (Joel McCrea) travels overseas to interview the famous pacifist Stephen Fisher, and maybe his hot daughter too.

Filmed after the start of war in Europe but set just prior, our heroes try to avoid war, but the bad guys want it. Mystery, suspense, and romance to follow. Standard Hitchcock stuff. Hey look, it’s Ian Wolf! That guy’s in everything! George Sanders is here too, and a bit of a cad, as always. Santa Gwenn was here but I somehow missed him.

I was a little disappointed by Foreign Correspondent. I like most of what Hitchcock directs, and there is no misstep here, but I failed to connect with the story or the characters. I’ve liked McCrea in other projects, and let’s face it. Joel McCrea only plays Joel McCrea. Maybe the fault lies in the lack of creativity in the “early war, Nazis are bad” microgenre (To Be or Not To Be, notwithstanding), but I didn’t take to it as I did his later work.

That’s not to say I hated it. It was fine. And I can see how his work improved over the years. It’s way more polished than the 1934 version of The Man Who Knew Too Much, and better in that regard than The Lady Vanishes, though I liked that more. The Hitchcock name comes with certain expectations and sometimes they land soft. Anyhow, AMRU 3.
Posted by Fred Theilig at 8:36 PM